Guest blog by Dr Ceri Houlbrook, University of Manchester and Researcher in Residence at the Library in 2015.

Question: What do an alligator, a snow-shoe, the sword of Oliver Cromwell, and the hand of an Egyptian mummy have in common? Answer: they were all part of Chetham’s collections (apologies if you were expecting a witty punchline).

Chetham’s Library may be most known for its collection of books and manuscripts, but during the 17th, 18th and 19th centuries, it held another type of object: the curio. The ‘curio’ is exactly what it sounds like: an object that provokes curiosity in the viewer. This could be a specimen of nature that’s particularly rare or unusual. It could be an exotic artefact brought back from a voyage of exploration. Or it could be a boring, everyday object, made ‘curious’ because of the stories attached to it.
Such curios were being accumulated by European collectors throughout the 16th-19th centuries, who proudly put them on display in what are known as ‘cabinets of curiosity’ or, to use the German phrase, the Wunderkammer. The Wunderkammer could be anything from a single cabinet to a whole series of rooms, filled with curios that were displayed in deliberately dense, haphazard, non-hierarchical clusters in order to showcase the immense variety of the collections. Chetham’s Wunderkammer was no different.

Chetham’s didn’t actively seek out their curios. Instead, they were donated to them over the years by individual collectors, so many of them are recorded in the Library’s gift book. The first curios recorded were ‘a snake or serpent’s skin’ and a ‘genealogical roll’, donated in 1685. In 1695 the Library was given a ‘pendulum watch’, a ‘Thermometer and Barometer’, and a ‘Clog-Almanack’. And from then on, a dizzying assortment of objects were donated, of which the following is just a sample: ‘a skeleton of a woman with several other curiosities’, ‘an alligator’s skin’, ‘a young swordfish, & the sword of an old one’, a ‘Flying Stag, also two Heads of the same kind’, the ‘Tail of a Rattle-Snake’, ‘large stone taken out of a woman’s bladder, it weighed 14 ounces & 6 drachm’, a ‘Brazilian lizard’, the ‘jaws of a shark’, a ‘strange kind of sea-weed/sea-heather’, a ‘shoe which the Laplanders make use of to walk on the snow’, an ‘alligator’, and the mummified ‘hand of a Theban Princess found at Thebes’. 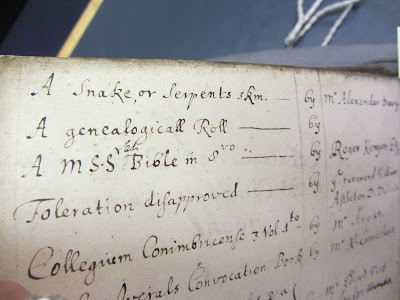 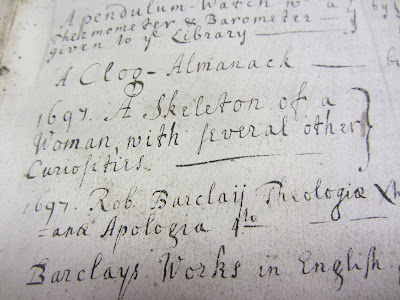 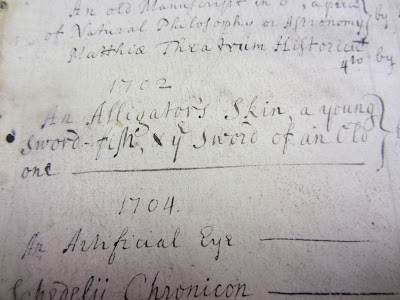 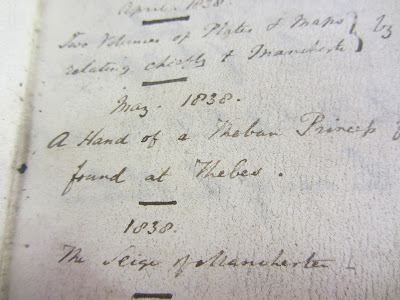 The Library’s gift book also lists some rather mundane items. A stone tankard, a whip stock, several swords, boots, arrows, a woman’s clog. These don’t sound particularly curious but the thing about curiosity is that it’s subjective; it all depends on how people look at an object and – more importantly – how that object is presented to them. Cue the Blue Coat boys.

Chetham’s Library was established alongside a Blue Coat charity school known as the Hospital. Local boys from respectable but underprivileged backgrounds were taken on as pupils of the school and one of their duties as ‘Blue Coat boys’ was to act as tour guide to any visitors wishing to see Chetham’s curios. Summoned by a bell, the young tour guides would lead visitors to the collection and perform a well-rehearsed recitation describing the items on display. In his Museum Chethamiense; or, A Choice of Oratorical Catalogue of the Rare and Valuable Curiosities Contained in the College Library of 1827, John Stanley Gregson gives us an idea of what these tours would have sounded like, and here’s just a snippet:

…that’s an ancient Stiletto – that’s part of Humphrey Chetham’s Armour – that with th’ white face is a Monkey – under th’ monkey’s a green Lizard – side o’ th’ monkey’s a Porpus’s Skull – under th’ porpus’ skull’s an Alligator – under th’ alligator’s a Turtle – those Bows & Arrows belonged to th’ Indians – that’s a Porpus’s Head – those are various kinds of Adders, Worms, Snakes, Fishes and venomous Creatures…

This exhaustive inventory appears to have been passed down orally through the generations of Blue Coat boys like folklore. And, just like folklore, it picked up a few embellishments along the way.
I said above that the Library’s gift book lists some rather ordinary objects. But the Blue Coat boys didn’t present them as ordinary; instead they employed the age-old method of shameless name-dropping. The tankard donated by Richard Moss in 1712 was no ordinary tankard, just as the sword was no ordinary sword and the boots were no ordinary boots. They all once belonged to Oliver Cromwell. Supposedly. Likewise, the other boot on display once belonged to Queen Elizabeth. The arrows in the collection were once owned by Robin Hood. Again, supposedly.

Other objects accumulated their own folklore. The woman’s clog was no simple clog, but was ‘a Woman’s Clog that was split by a thunder bolt, and hoo wasn’t hurt’ (Gregson 1827). The skeleton held in their collection was that of a Highway Robber. And the whip stock on display was the one that supposedly killed a snake. What snake? The one found drinking the Blue Coat boys’ milk.
Call me cynical but I sense that Chetham’s young cicerones were being a tad liberal with the truth. But that’s the fascinating thing about folklore: repeat a fictitious embellishment enough times and it becomes cemented as fact.

As popular as Chetham’s collection of curios was during the 18th and early 19th centuries, fashions wax and wane. With the rise of museum culture, the Wunderkammer fell slowly out of favour and, sadly, Chetham’s collection was disbanded in the late 1800s, with the Library keeping only a few items: the ‘Thermometer and Barometer’ (a modest and possibly confusing description of a tall case clock standing almost three metres high), which can still be seen in Chetham’s Reading Room. 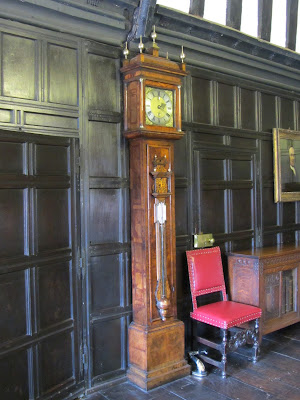 The clog-almanack, described here as one of Chetham’s 101 Treasures. 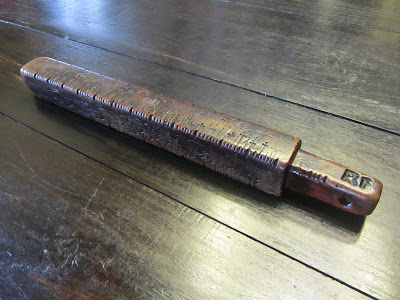 And two stags’ heads, displayed in the Baronial Hall. 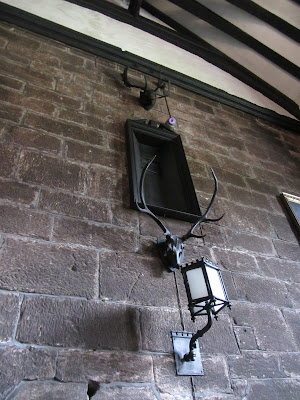 The majority of the curios went to Peel Park Museum in Salford and, from there, were further disbanded. But records from that time were far from meticulous, and so where most of these objects ended up remains a mystery. Might the alligator, snow-shoe, sword of Oliver Cromwell, and hand of an Egyptian mummy be gathering dust in storage somewhere, waiting to be rediscovered?
Posted by Chetham's Library at 11:31