‘It had not been my intention to write a journal…’ 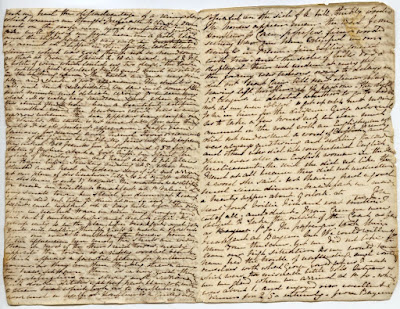 A small journal written by a young lady from Jersey will be the focus of today’s post. Miss Mary Ann Lemprière began her journal on 6 January 182[5], the day she left her home to travel to Plymouth. She commences her journal by stating:

'It had not been my intention to write a journal but so many pleasant circumstances have happened which ought to be brought back to my recollection that I [shall] briefly state what has taken place'.

Throughout her journal Mary frequently refers to her brother and sister and travel companions, George and Jane. Following their arrival at Plymouth, where they spend a week in quarters at the Royal Hotel, they visit Bodmin and Launceston, before departing for France 'on Saturday morning at 6 o clock 3rd September 1825'.
The evening before departure Mary allows a friend to fill a page of her journal:


‘With Miss Mary Ann Lemprière’s permission a young man of the name of Frederick [Jauroin] opened this book [and] with the assistance of one of Miss Jane’s best drawing pencils was enabled to commence an interesting journal of her travels from the Isle of Jersey across the vast ocean which separates it from France [and] after having amused her readers made her readers shudder at the description of this sea voyage which was fraught with dangers of every kind she once more gets a footing on dry land then behold the scene changes on a sudden to the sublime [and] beautiful. The city of Granville is painted in all those glowing colours which so eminently distinguish the fair author’s style.’ 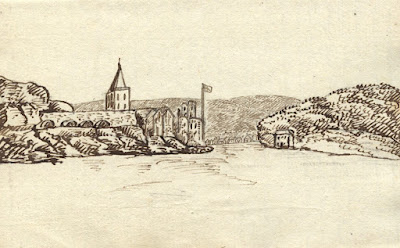 They arrive at the port of Granville at half past nine in the evening, following an uncomfortable journey:


‘we sailed … for Granville expecting from the state of the weather to reach that port in 6 hours. But who can form plans on the water without being liable to be defeated in them!’

As she travels to Paris Mary describes in detail the scenery of rural France. She has a particular interest in the architecture of domestic buildings and churches, occasionally roughly sketching parts of buildings to illustrate her text. 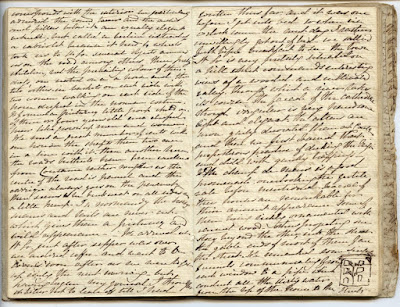 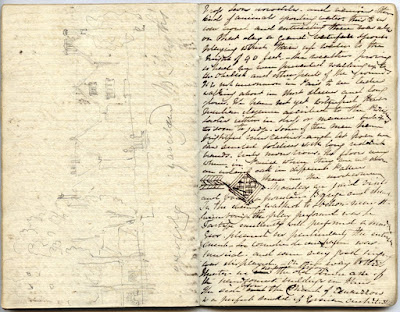 During their time in Paris Mary and her companions visit theatres, galleries and gardens and admire the fine architecture. They attend a number of plays and recitals, and spend an evening in the famous Théâtre de Vaudeville, which left her party unimpressed:

‘we were not much delighted with the musick and performance[s]’.

They have a more enjoyable time when they visit the Jardin des Plantes:

‘We were very much amused with a sight of the different outlandish animals and some beautiful birds.’

They also enjoy their visit to the ‘magnificent gallery of the Louvre’ and Notre-Dame Cathedral, which Mary says is ‘the finest Gothic I have seen since Rouen Cathedral’. The party leave Paris to travel to Rouen, and then back to Granville, where Mary ends her journal complaining of a hotel room with filthy floors and full of fleas.


'beds rather damp as at Caen ... however slept tolerably took our meals in George's room whilst at Granville ... attendance bad and floors filthy.' 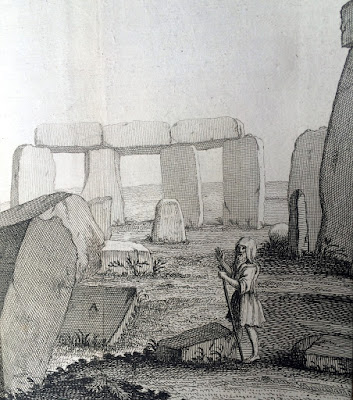 As symbols of British summertime, the solstice and Stonehenge go together like strawberries and cream or mud and Glastonbury. With this in mind, we have been browsing through William Stukeley's book Stonehenge a temple restor'd to the British druids… published in 1740.

The historian Rosemary Hill writes of Stukeley that 'He was..the first person to realise that the thing [Stonehenge] was oriented in some way with the solstice... and once you do that, you are no longer in the business of just measuring things and digging things. You are now involved with something that has purpose, motive and meaning - so you have to try to work out what that might be'. 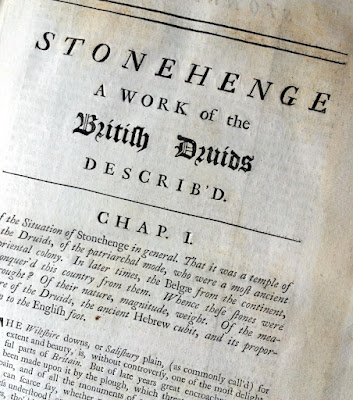 Stukeley was from a Lincolnshire family, studied and practiced medicine and was eventually ordained and moved to a living in Stamford, Lincolnshire in 1730. His interests were many and varied. He became a fellow of the Royal Society and a friend of Isaac Newton. He joined the Masons and was a founder member of the Society of Antiquaries, and he took great pleasure in travelling up and down the country exploring antiquities, old buildings and ruins, including Stonehenge and Avebury, which at this time were being raided by locals to provide stone for building cottages, barns, pig sties etc.

Stukeley was well read and undoubtedly knew of the theories published by previous researchers on the origins of the stone circles, notably by Inigo Jones and John Aubrey. The most Notable Antiquity of Great Britain, Vulgarly called Stone-Heng on Salisbury Plain, Restored by Inigo Jones Esquire was loosely based on Jones notes but actually published posthumously in 1655 by John Webb. He had concluded that Stonehenge, since it was a structure of ‘elegancy and proportion’, had been erected not by the native Britons but by the Romans. In the mid seventeenth century the antiquary John Aubrey surveyed both circles and eventually published Monumenta Britannica, or, A miscellanie of British antiquities, in 1693. He concluded that the circles were attributable to peoples native to the British Isles and that, based on references by classical authors, this could only have been the priests known as Druids. 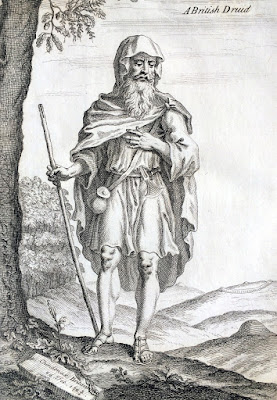 Stukeley undertook his own extensive fieldwork at Stonehenge and Avebury during the summers between 1718 and 1724. He made new discoveries - for example the earthwork avenue and the astronomical alignment of the stones - and although some of his interpretations were imaginative but incorrect, he laid the foundation for much of the research by future scholars. His book was based on the many notes, sketches, drawings, and measurements that he made.

Stukeley is described as 'having drawn all his life' and his illustrations for the book manage to combine scientific detail with considerable quirky charm. Many of the images are so large that they are folded into place within the book's pages. He chooses to indicate scale in almost every landscape by including human figures - visiting tourists, bewigged gentlemen either on horseback or standing gesticulating at the stones with their walking sticks, ladies with fans, a reclining artist or a shepherd and his dog. 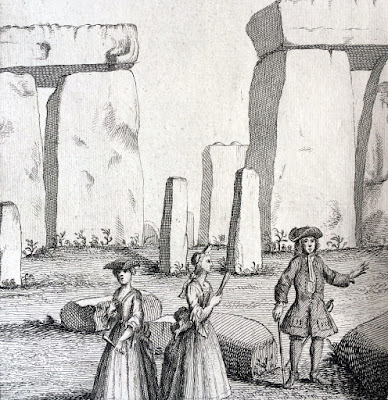 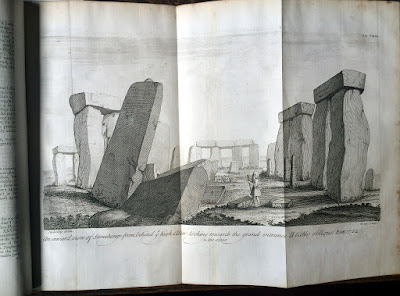 Stukeley's interest in the stone circles became a very personal obsession - alongside his other interests he was an enthusiastic garden designer and his ideas on religion and the early British druids are clearly reflected in his designs for his own gardens. In October 1728 Stukeley writes to his friend Samuel Gale: 'If you enquire what I am now about: I am making a Temple of the Druids, as I call it, tis thus. There is a circle of tall filbord trees in the nature of a hodg [hedge], which is 70 feet in diameter, round it is a walk 15 foot broad circular too... When you enter the innermost circle or temple, you see in the centre an ancient appletree overgrown with sacred mistletoe...'

The most cruel of all goddesses

The most cruel of all goddesses, a new film by Declan Clarke, is currently showing at the new HOME arts and cinema complex in Manchester. We feature as one of the locations in the film, which takes an oblique look at the life of Friedrich Engels. Engels famously studied at Chetham's Library with his friend and collaborator Karl Marx, and the desk where they worked together is a frequent place of pilgrimage for many of our politically minded visitors. 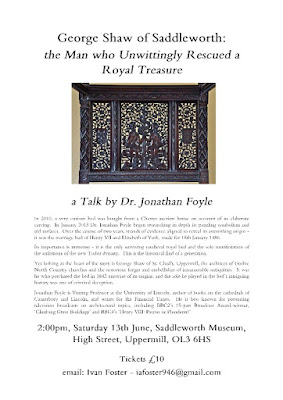 There will be a talk by Jonathan Foyle at Saddleworth Museum in Uppermill on Saturday 13th June at 2pm for anyone who is interested in the 'Paradise Bed' which has historical links to the furniture in our Reading Room. We also have a large collection of furniture made by George Shaw. Looks like a great afternoon! Do go along. Tickets £10 from Ivan Foster: iafoster946@gmail.com
Posted by Chetham's Library at 15:49