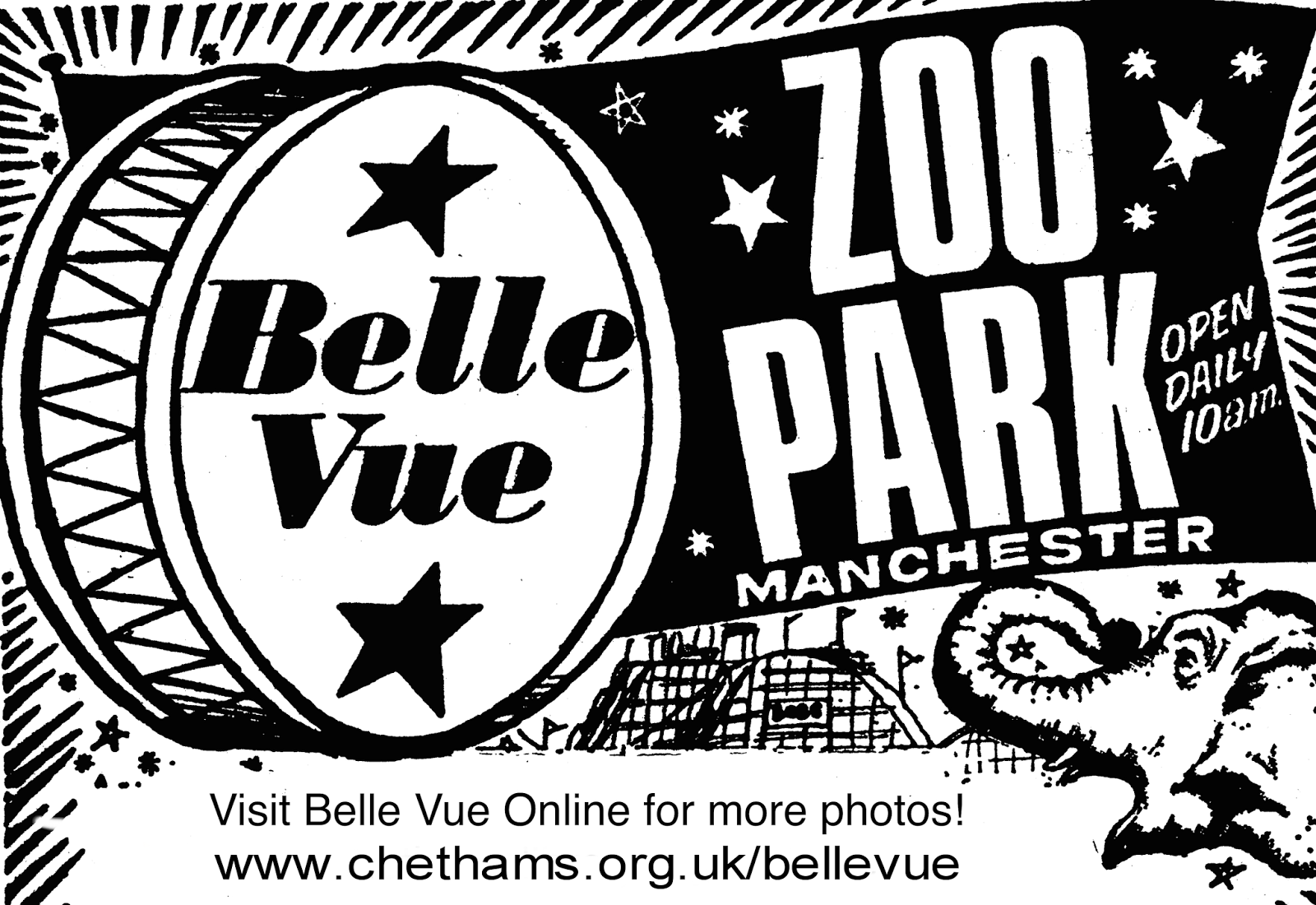 Sunday 8th and Monday 9th March from 12-4 pm
Chetham's Library is bringing its Belle Vue Collection to beautiful Gorton Monastery for a Belle Vue Festival! We'll be joining other Belle Vue enthusiasts for a day of fun and memories. Remember the magic  of Belle Vue with friends and family. 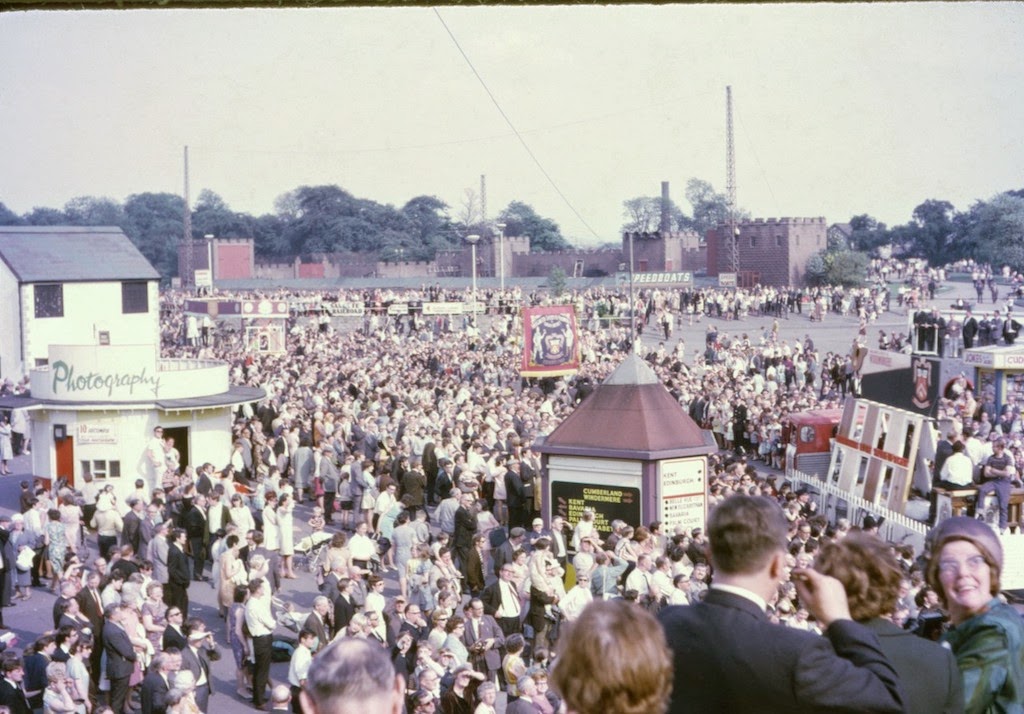 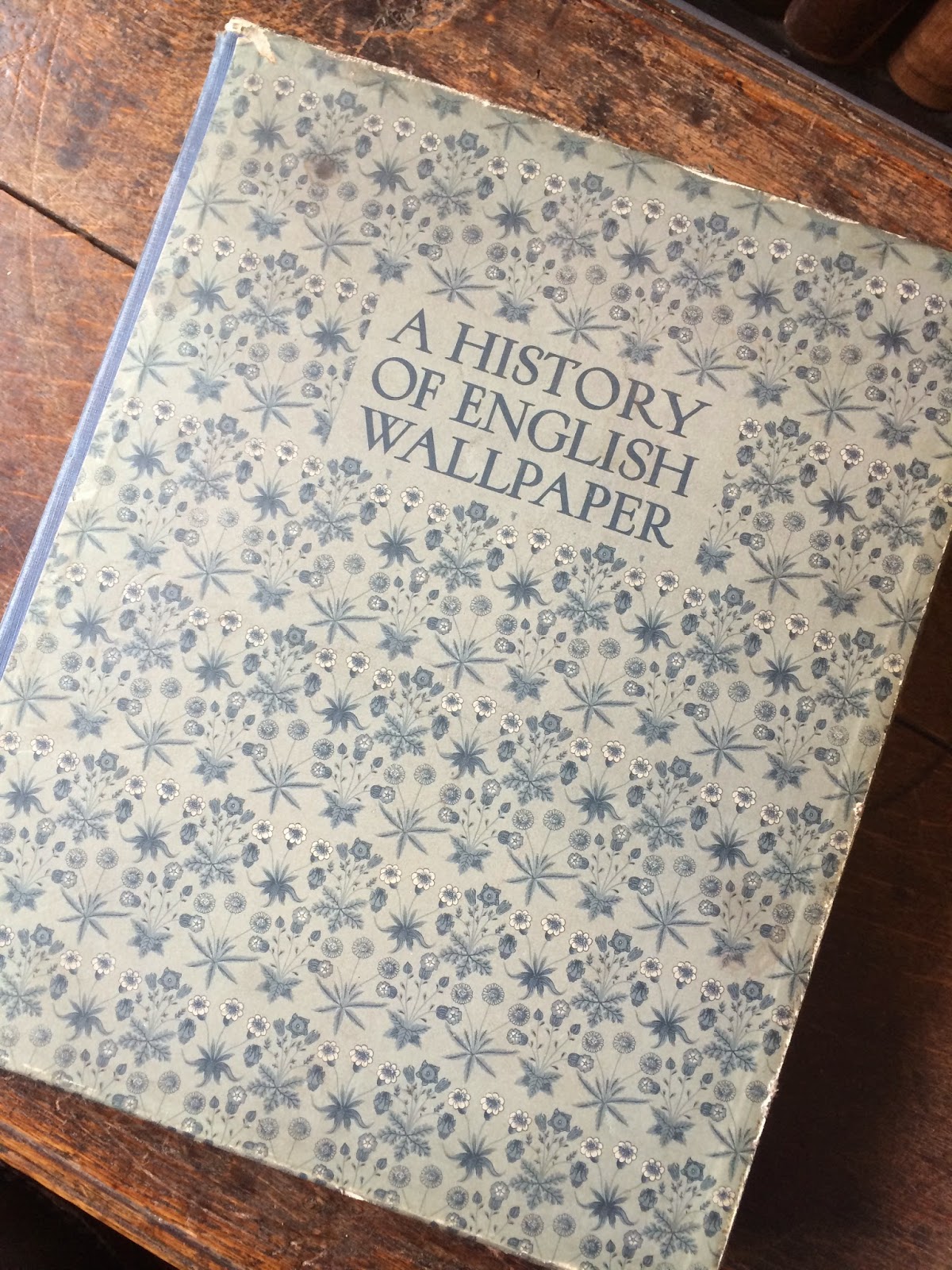 We recently noticed on a lower shelf in the library, an attractive, if slightly shabby, blue daisy patterned box. The pattern on both the box, and the jacket of the book inside it, is a single colour version of William Morris's 1862 design 'The Daisy', the first Morris wallpaper to be put on the market. The book inside the box is  'A history of British wallpaper 1509-1914' which was published by Batsford in 1926.

There is a letter ‘tipped in’ to the front flyleaf from the Assistant Secretary of The Wallpaper Manufacturers Limited, Manchester Office, King Street West which indicates that the Chetham's Librarian, Charles T.E. Phillips, had approached them for a copy of the book shortly after it was published.

By the mid-nineteenth century Britain was considered to be the world leader in the industrial production of wallpaper both in terms of design and technology, and Manchester was arguably at the heart of this industry. The book is illustrated with both black and white images of historic wallpapers and with tipped-in colour plates and the introduction claims that it is the first to offer a comprehensive account of the British wallpaper industry. Chapter headings include 'Chinese papers and English imitations' and 'The coming of William Morris' . 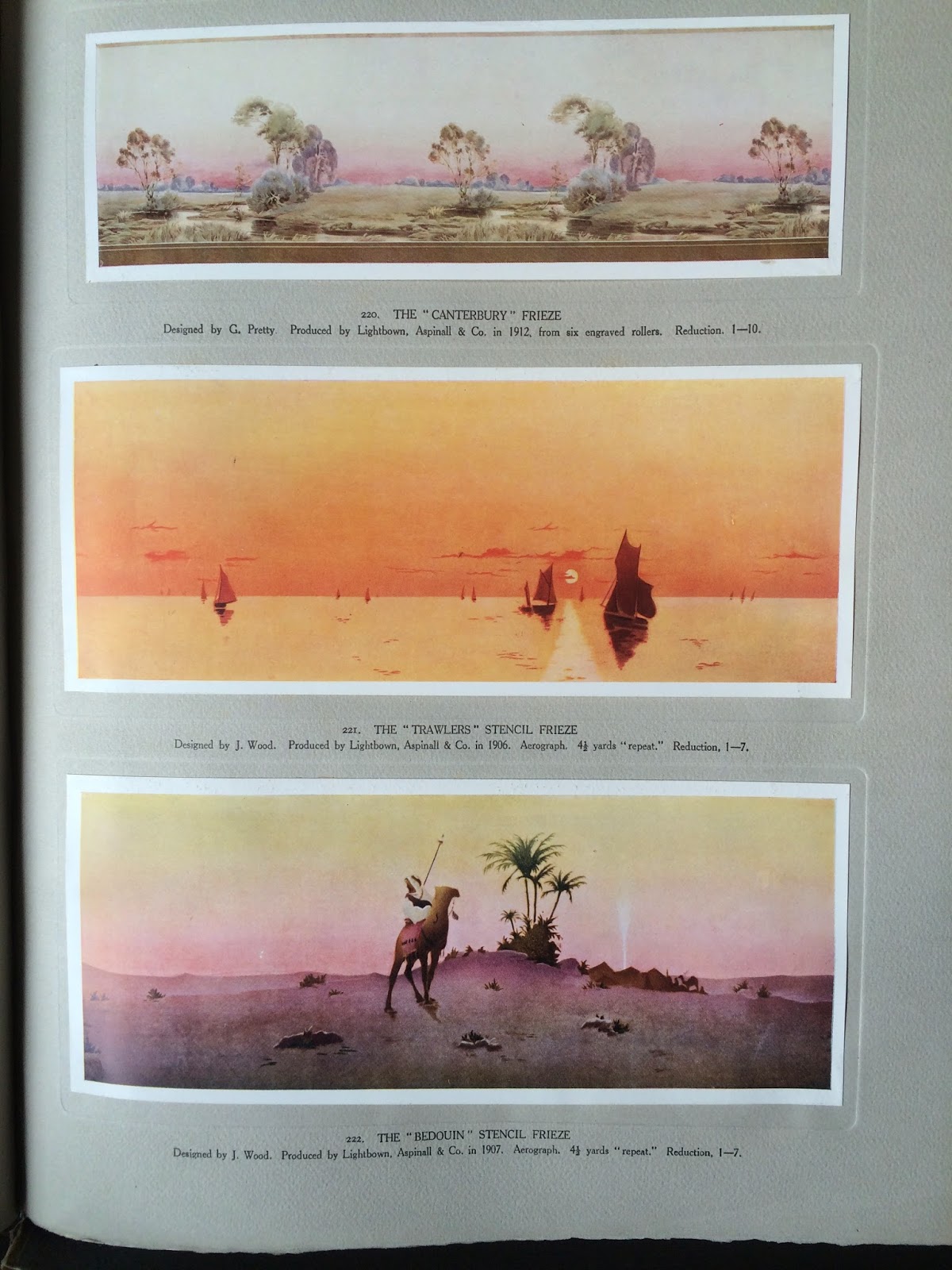 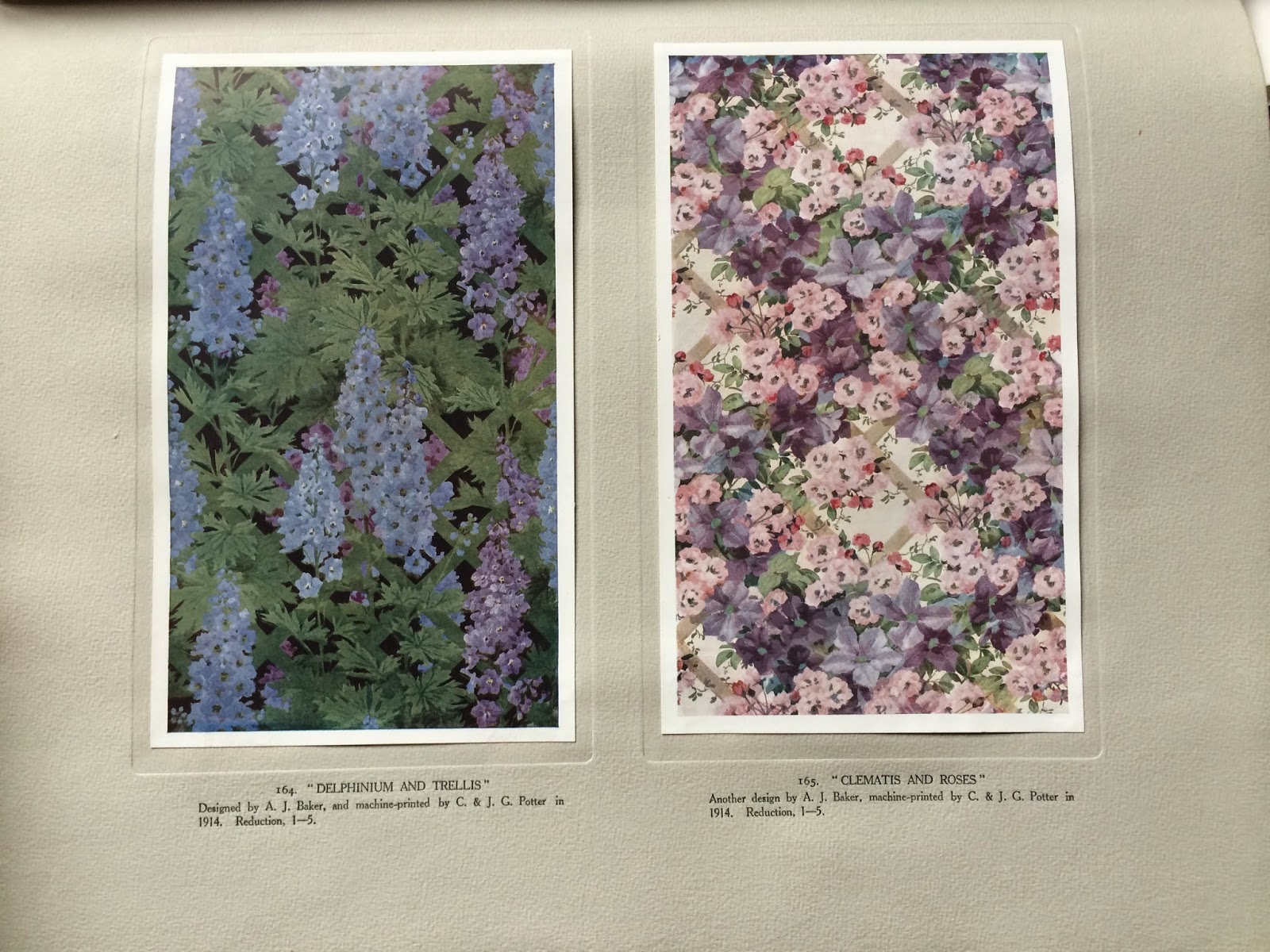 Skimming through the pages of the penultimate section, 'Mill Records', one of the library volunteers was startled to see the name of what she realised was a family firm – Mitchell, Arnott and Co. She was aware that the Arnott family had owned a 'paper staining' business in Golborne but knew little of its origins. The company was formed when expansion by the East Midland Railway forced the block printers Mitchell and Hammond  to move from their Manchester premises (at Jackson Street, off London Road). In 1863 they found a suitable temporary mill in Golborne and by 1865 had built a completely new factory there, Brookside Mills, where shortly after they were joined by a new partner, W.H. Arnott – Great, Great Grandfather to our volunteer. 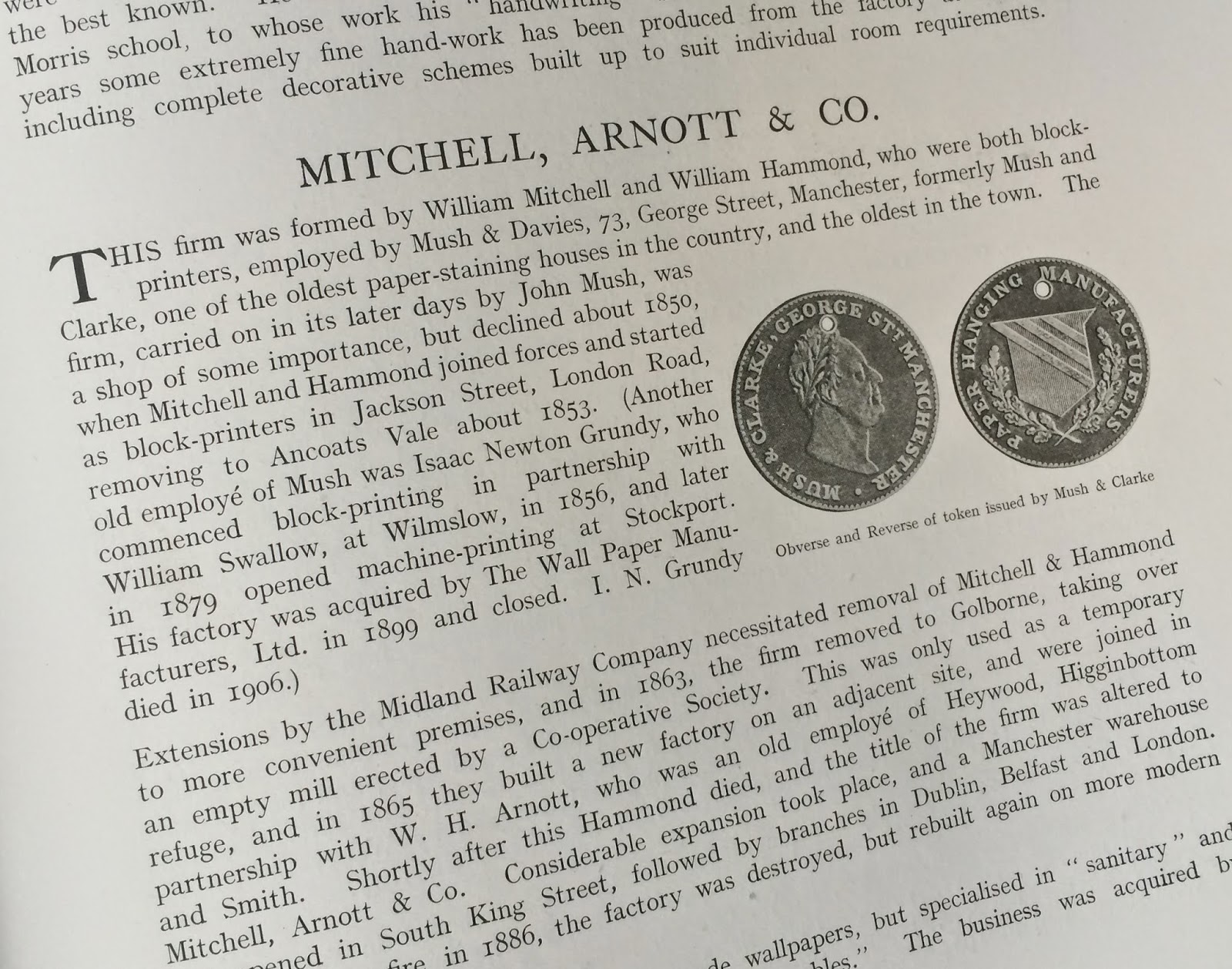 William Henry Arnott was previously employed by the well-known Manchester paper stainers Heywood, Higginbotham and Smith, and he and William Mitchell went on to build a very successful business in Golborne, specialising in the production of 'sanitary goods' or washable wallpapers. A visit by reporters from the Leigh Chronicle in the 1880's, describes how the mill covered one and a half acres and employed more than 200 people from the village. So, when fire broke out at the mill in December 1886, and the entire complex burned down, the Chronicle described it as '..the greatest disaster that has ever befallen Golborne’. However, the business must have risen from the ashes, as the book records that it was taken over by The Wallpaper Manufacturers Ltd in 1899.

Interestingly, in 1967,  The Wallpaper Manufacturers donated a huge collection of samples to the Whitworth Art Gallery which formed the bulk of its renowned collections. These should be accessible again very soon at the newly re-opened gallery.

This is the only family photograph of William Henry (in top hat and impressive facial hair) standing next to a gentleman cyclist and a penny farthing bicycle, outside a house which is probably 'The Laurels' in Lowton. 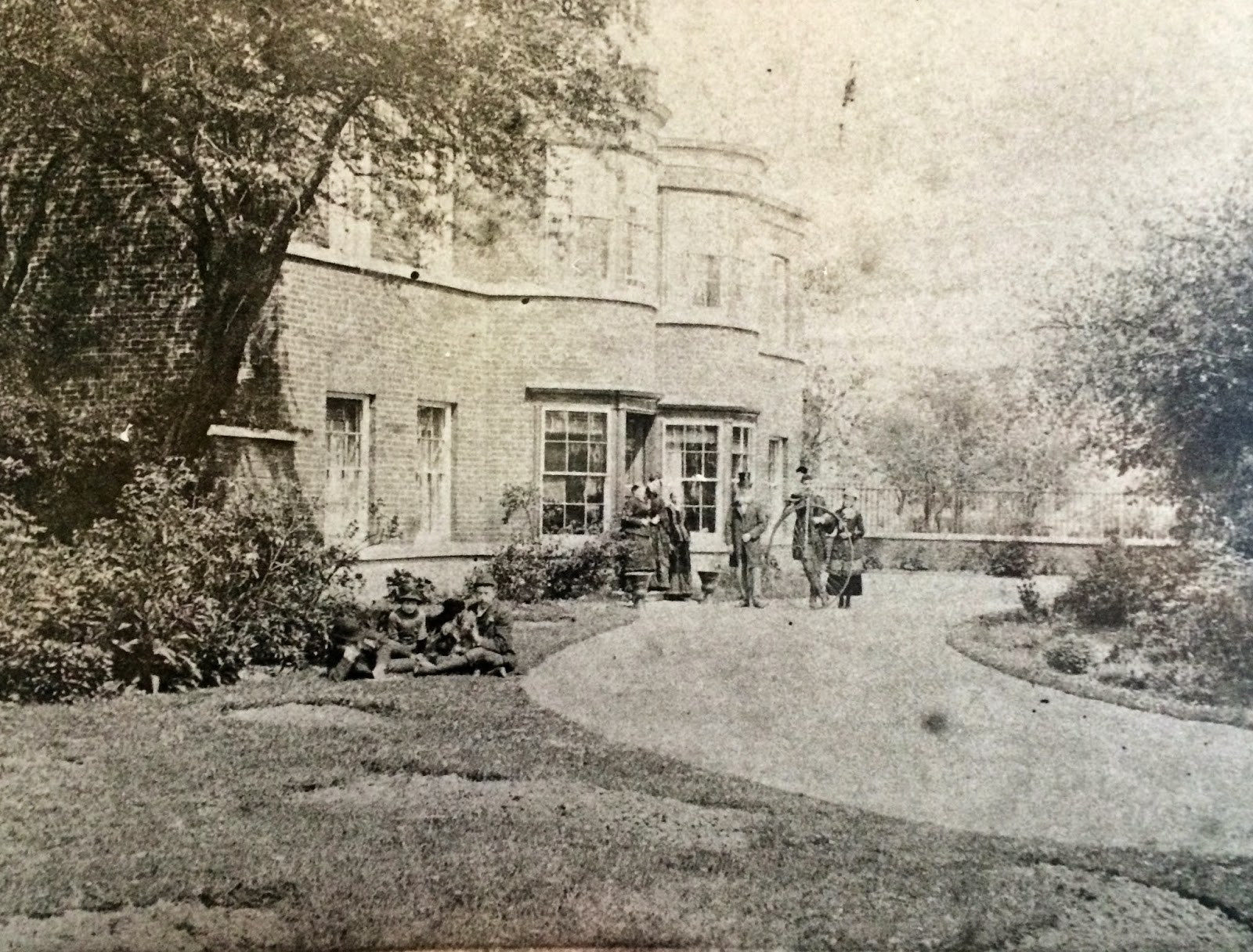 He died quite suddenly in 1900 at the age of 72 and had clearly become the proverbial pillar of the community. His obituary lists at some length all the positions he held - magistrate, chair of Leigh Rural District Council and of the School Attendance Committee, overseer of the poor, and eventually County Councillor. However, our volunteer is not sure whether she and her ancestor would have got on well, as the obituary also records that ‘in politics he was a strong and unbending Conservative and for some time was chairman of the Golborne Conservative Club...' Strangely, William Henry died intestate, which might explain why there has been no trace of any family fortune...

The origin of the Sun King? 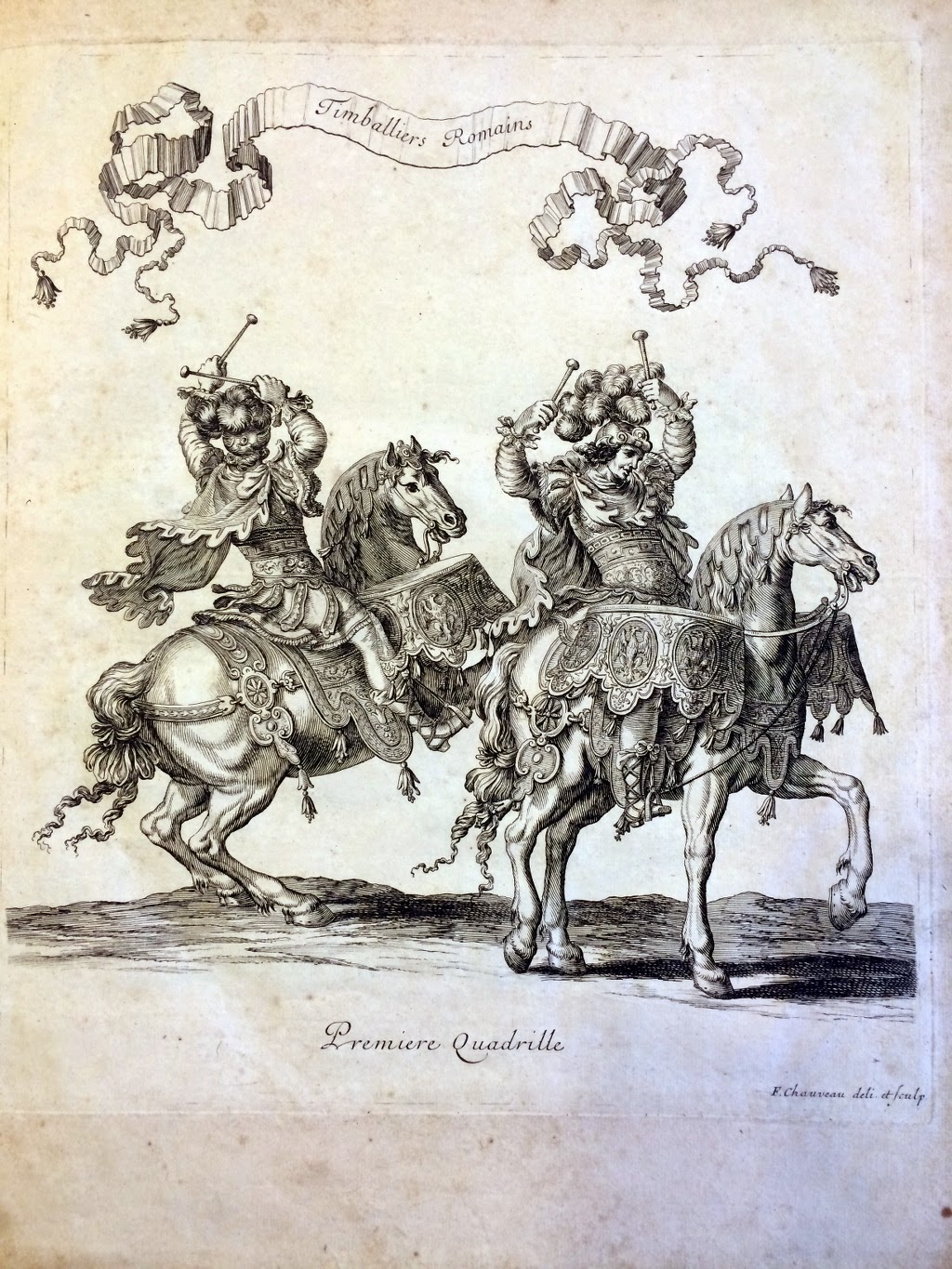 This collection of exuberant engravings of prancing stallions and ringleted riders has actually been extracted from a seventeenth century 'festival book' . The original volume was published to celebrate the Carrousel (or tournament) held in June 1662 by Louis XIV, which was the last fete held in Paris before he moved the court to Versailles. Opinion varies as to whether the event was staged for his mistress Louise, Duchesse de la Valliere or to celebrate the birth of his son, Louis. 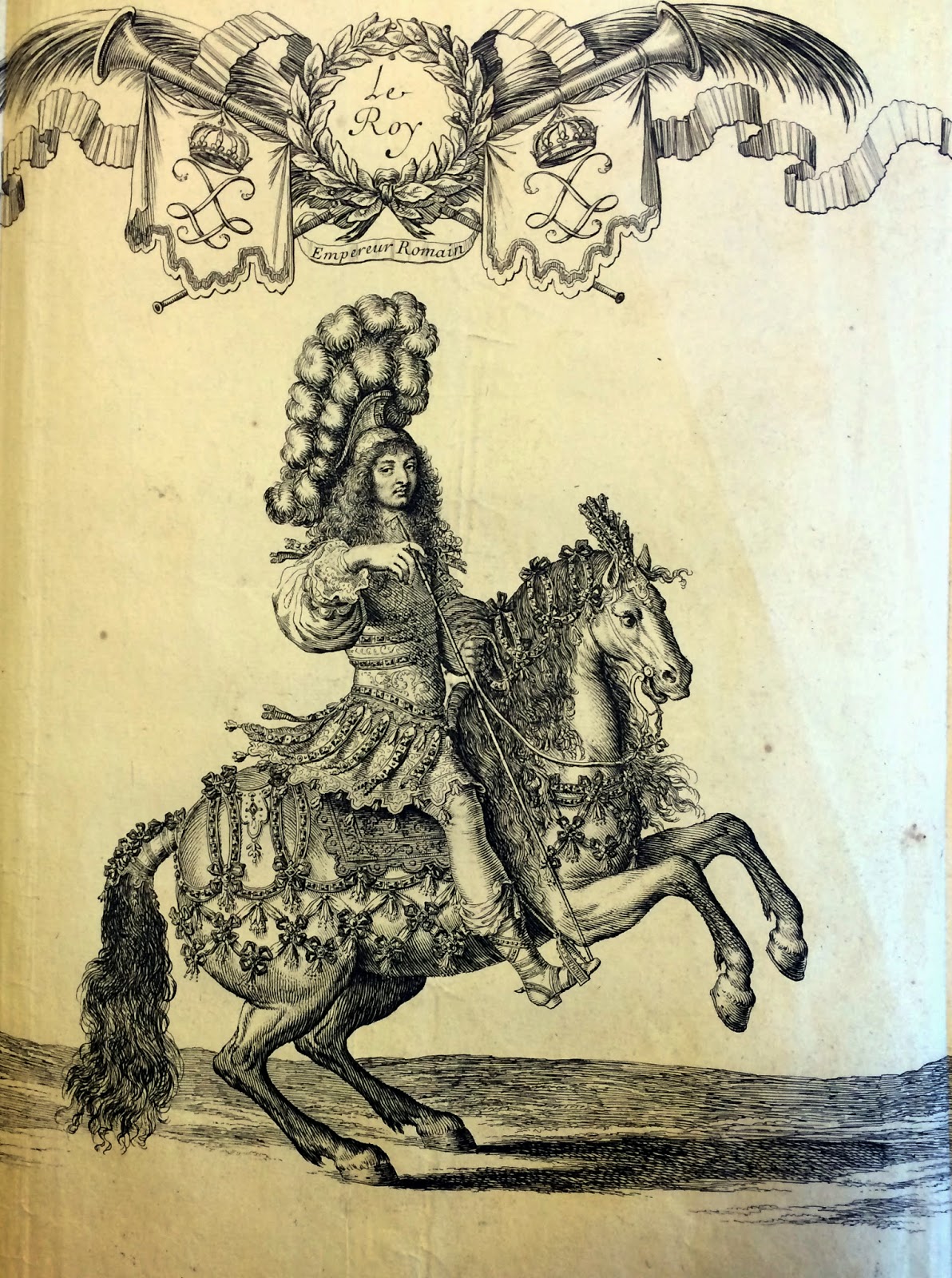 Festival books were published to record the magnificent festivals and ceremonies that took place in Europe between 1475 and 1700 such as the marriages and funerals of royalty and nobility, coronations and other grand events. As official publications, they were essentially PR jobs designed to impress and promote the image the court or government wanted to project. They are idealised rather than being strictly factual. 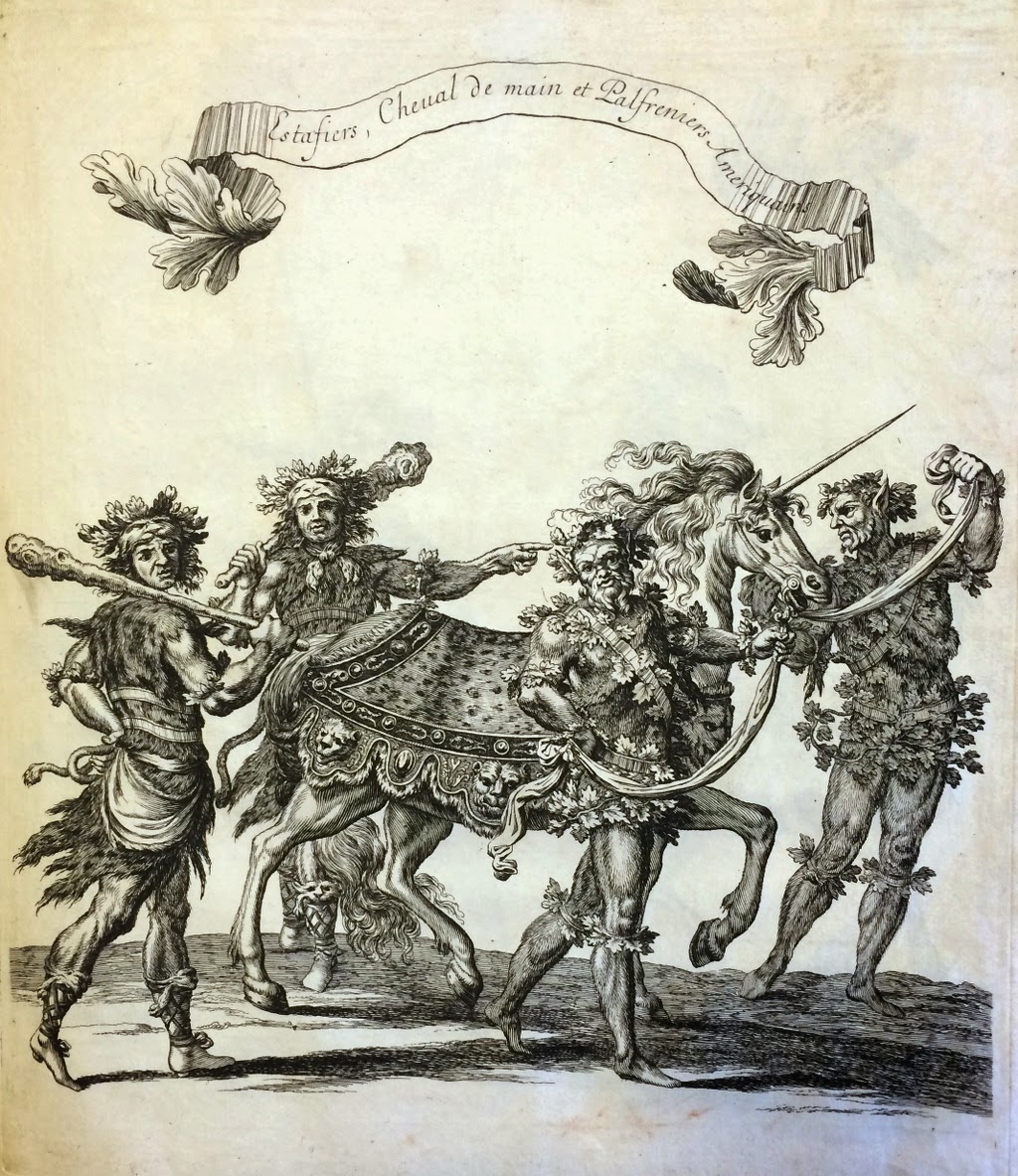 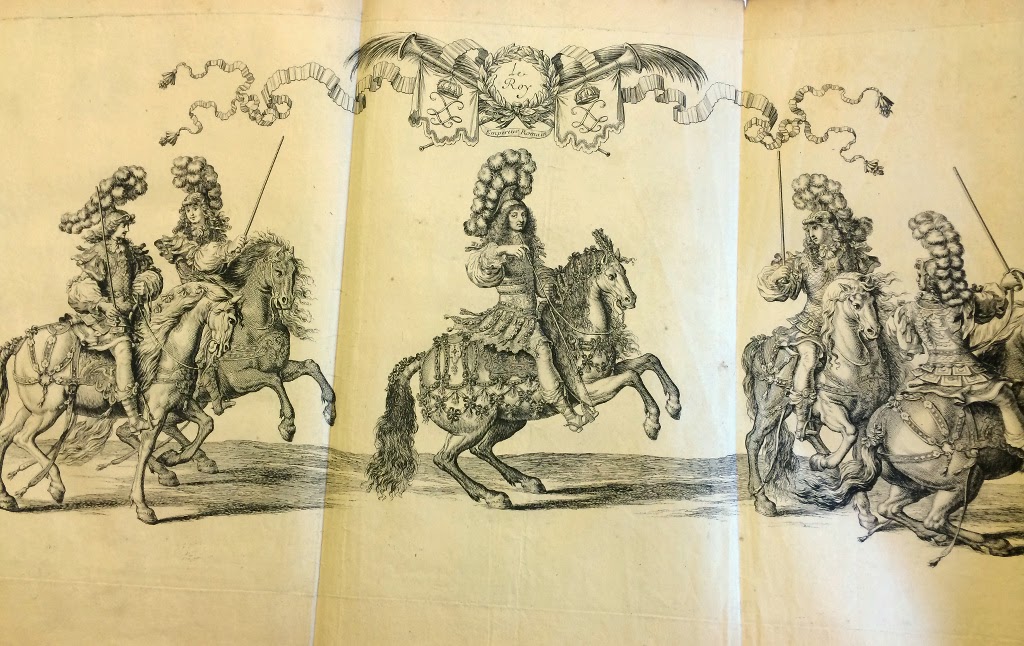 The book from which our extracts have been taken was lavishly illustrated, with 97 engravings, and was published by the Royal Press in 1670 in both French and Latin, so it could be circulated outside France. Louis XIV was particularly proud of this publication and had his own copy hand coloured. The original French text was written by Charles Perrault, who became famous as the author of what we know as the 'Tales of Mother Goose' and the engravings were created by Israel Silvestre and Francois Chauveau. 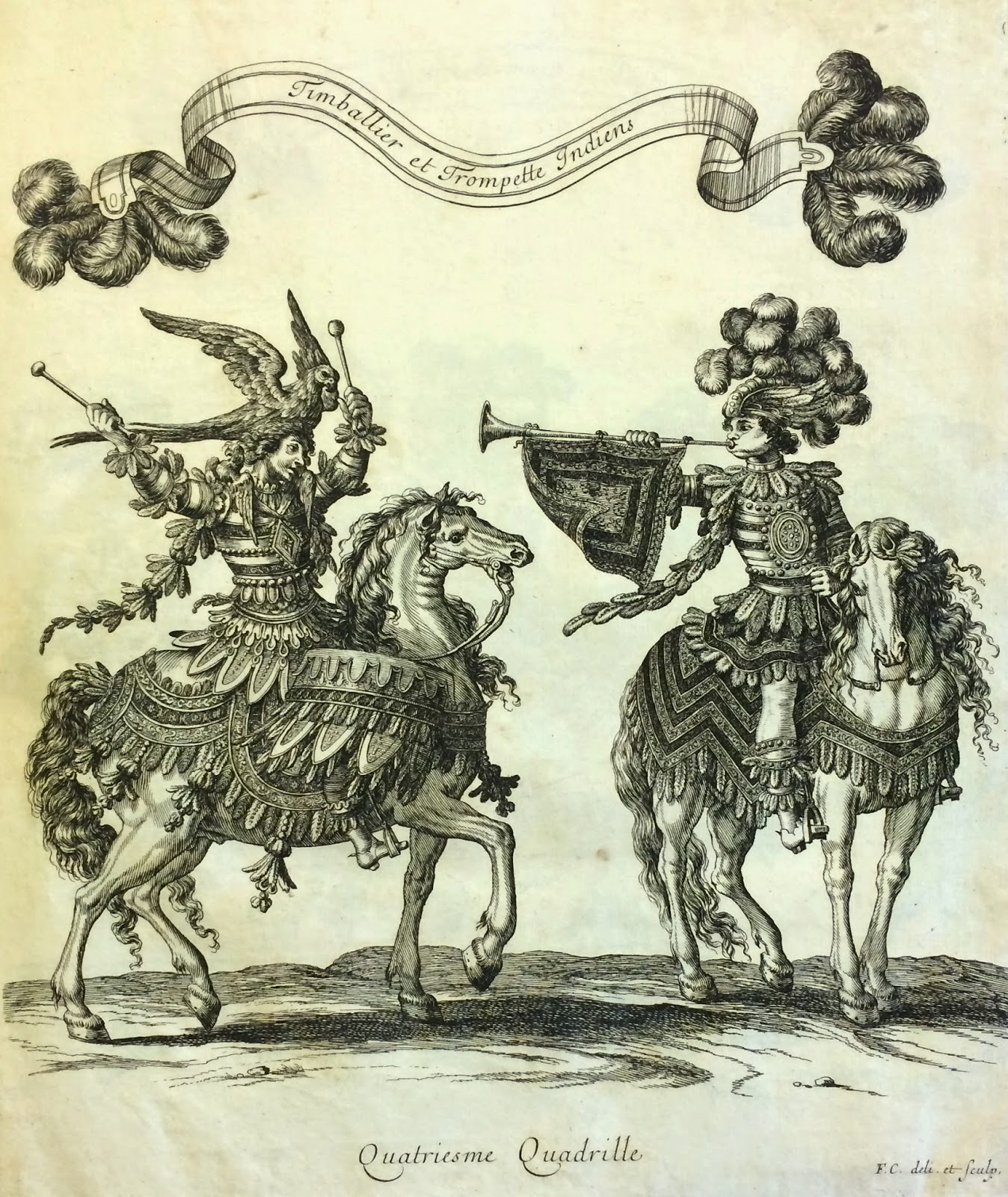 Allegedly organised by the 24 year old king himself, who was a gifted horseman and enjoyed performing, the Carrousel involved 55 participants and horses, divided into teams (or 'quadrilles') which competed in a course de bague (a game which seems to have resembled polo, where the riders attempted to spear a ring whilst riding at full gallop). The teams represented different nations - Romans, Persians, Turks, East Indians and Native American Indians - with the king and four of his noblemen acting as chiefs. Each team was elaborately costumed in specific colours and the decorations and motifs worn by the team members all had symbolic and heraldic meaning. The Romans, led by the king dressed as a Roman Emperor, were in red and gold. Significantly, Louis's device was a sun, and it appears that this was the first record of his use of the emblem which became such a key part of his identity as the Sun King. 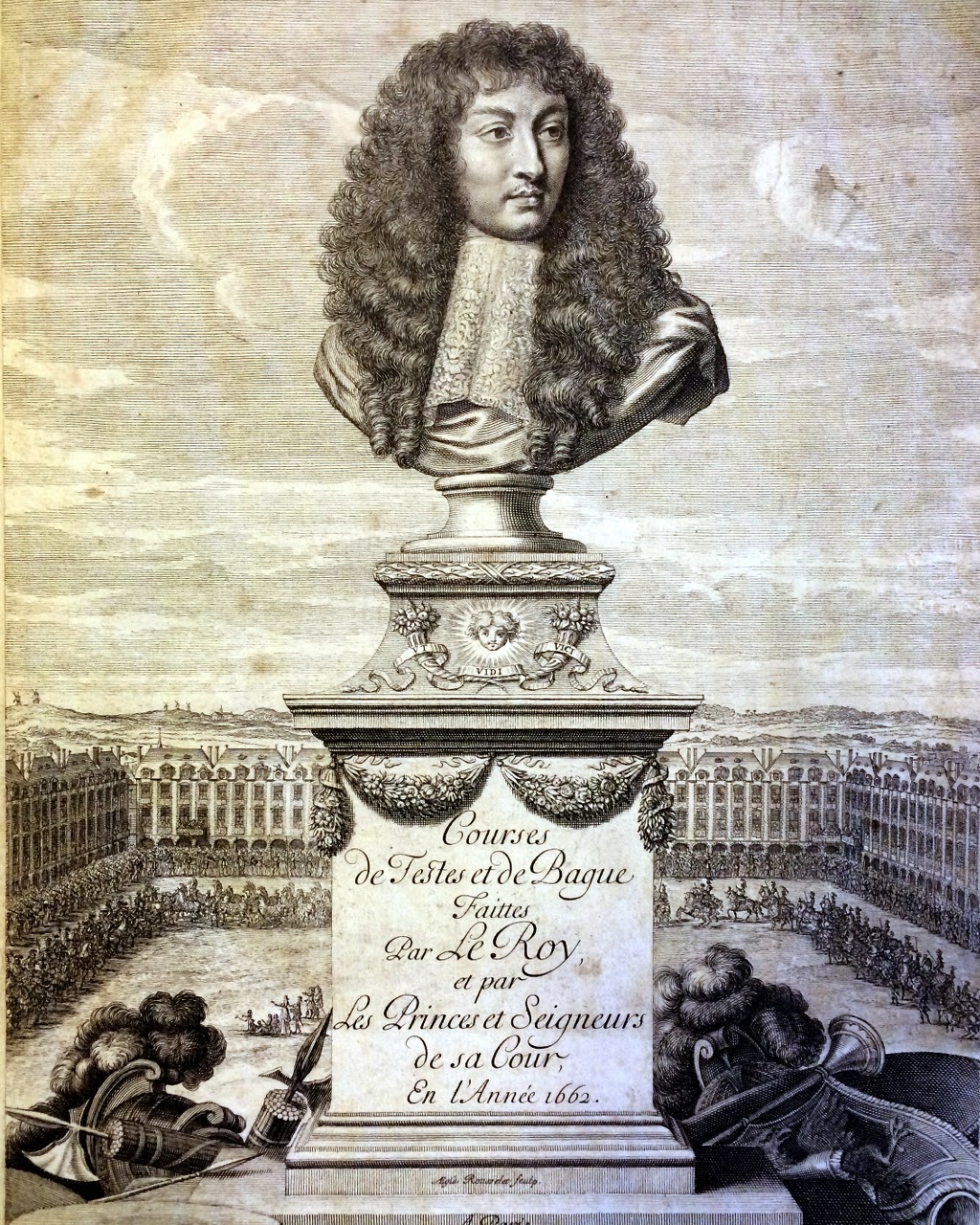 Man of the moment: William Tyndale 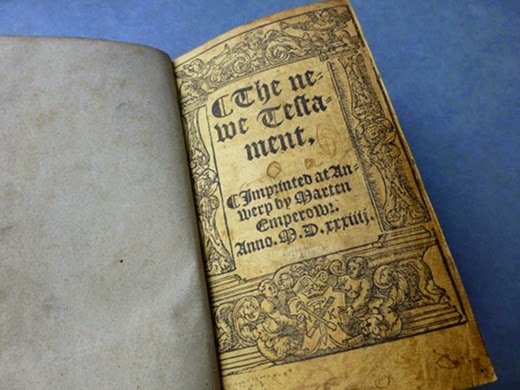 Fans of 'Wolf Hall' will have been watching with bated breath the spreading influence of Protestant reformer and translator William Tyndale, who also features in this excellent BBC documentary with Melvyn Bragg.

We are privileged to hold a copy of the 1534 revision of Tyndale's translation of the New Testament, a book described by the British Library as 'the most important book in the English Language'. Find out more about our copy in the 101 Treasures series on our website.

'He hath unmysteried the mystery of heraldry...' 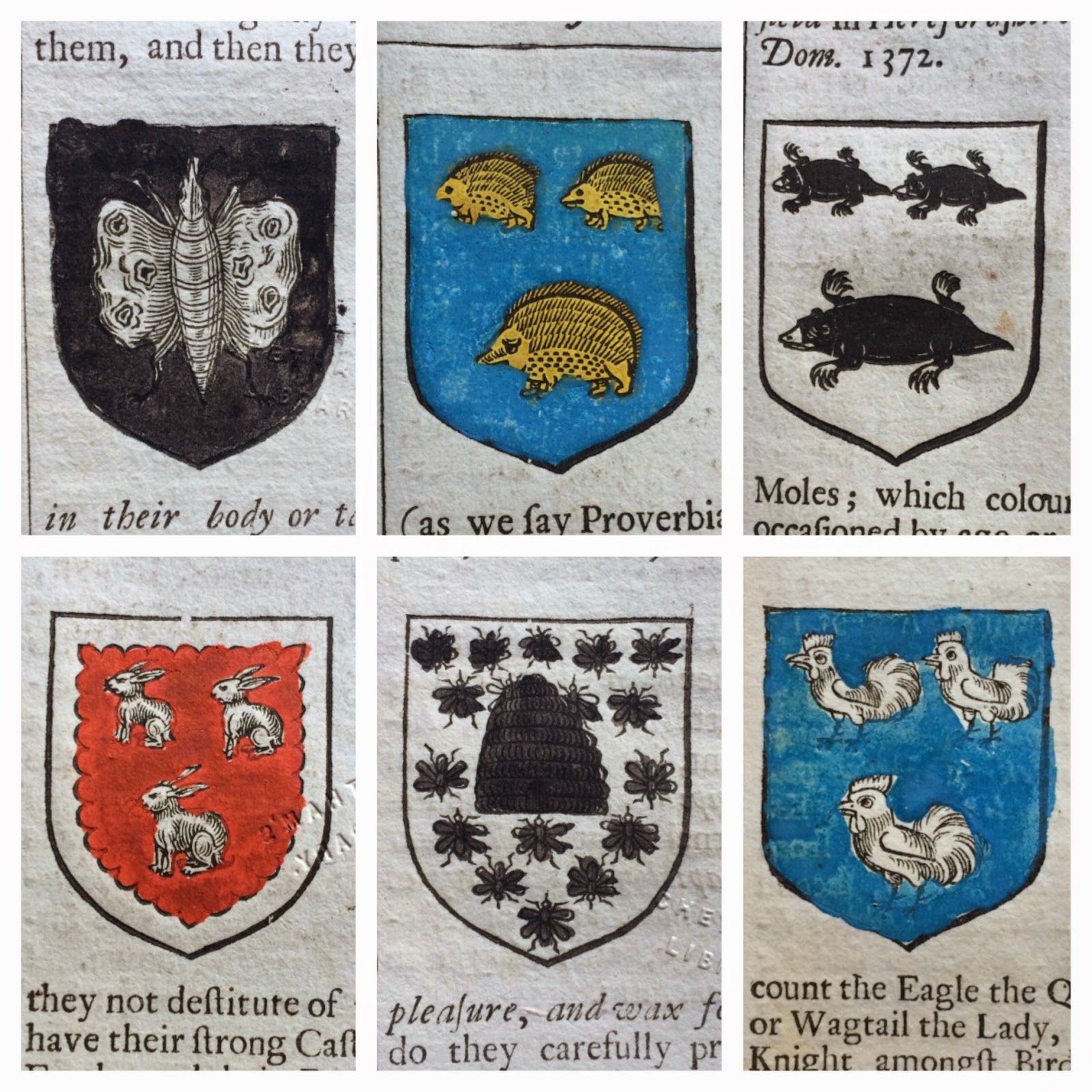 Our copy of John Guillim’s Display of heraldry (5th edition 1679) is doubly delightful, as it is both a fascinating (and entertaining) early work on heraldry and also an excellent example of the practice of ‘Grangerisation’.

Guillim was an antiquarian and officer of arms at the College of Arms in London. He is described in Thomas Fuller’s 1662 edition of the ‘Worthies of England’ as being

‘…of Welsh extraction, but born [1565] in [Herefordshire]; and became a pursuivant of arms...but most eminent for his methofdical Display of Heraldrie (confusion being formerly the greatest difficulty therein); shewing himself a good logician in his exact divisions, and no bad philosother, noting the natures of all creatures given in arms, joining fancy and reason therein.

Besides his travelling all over the earth in beasts, his industry diggeth into the ground in pursuit of the properties of precious stones, diveth into the water in quest of the qualities of fishes, flieth into the air after the nature of birds, yea mounteth to the very skies about stars...and planets, their use and influence. In a word, he hath unmysteried the mystery of heraldry….’ 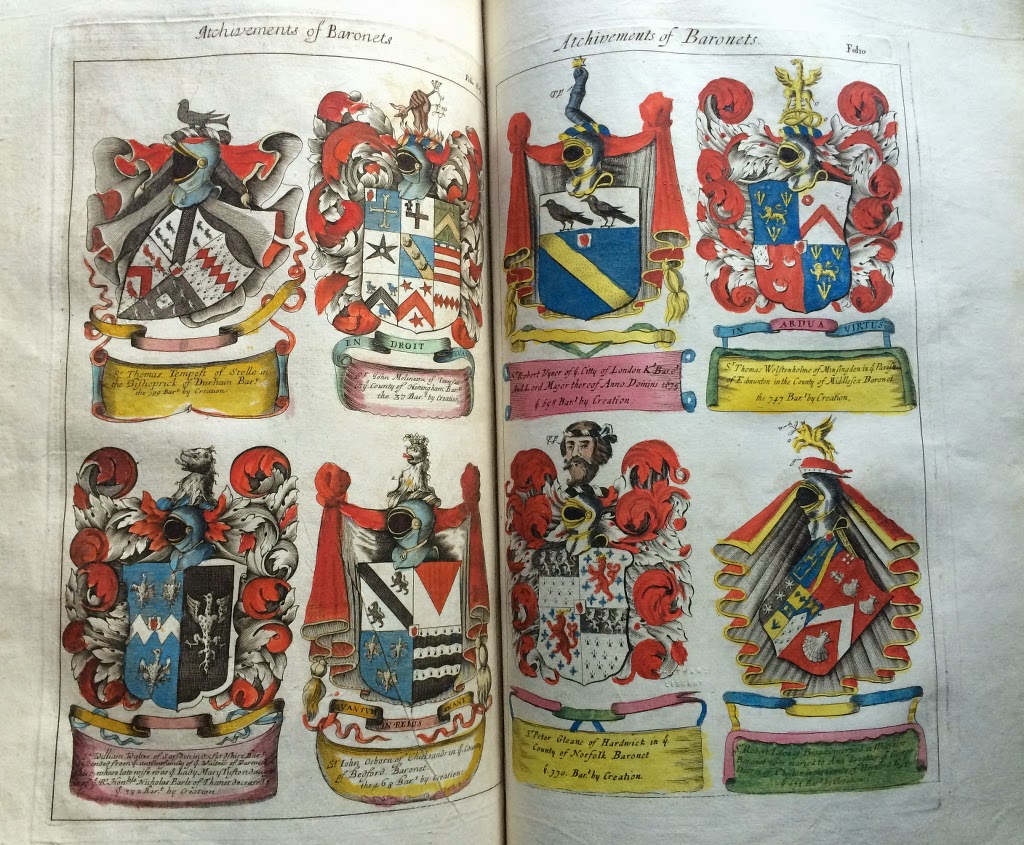 The Display was first published in 1610, ran into seven increasingly large editions and remained the standard work on English heraldry for over 150 years. It is copiously illustrated and Guillim’s detailed notes regarding the different components of heraldry are very lively. Who knew that, in addition to the familiar lions and unicorns, a coat of arms could feature ‘emmets’ (ants), mole hills, body parts and even, in the case of the town of Lichfield ‘ divers Martyrs massacred…’ 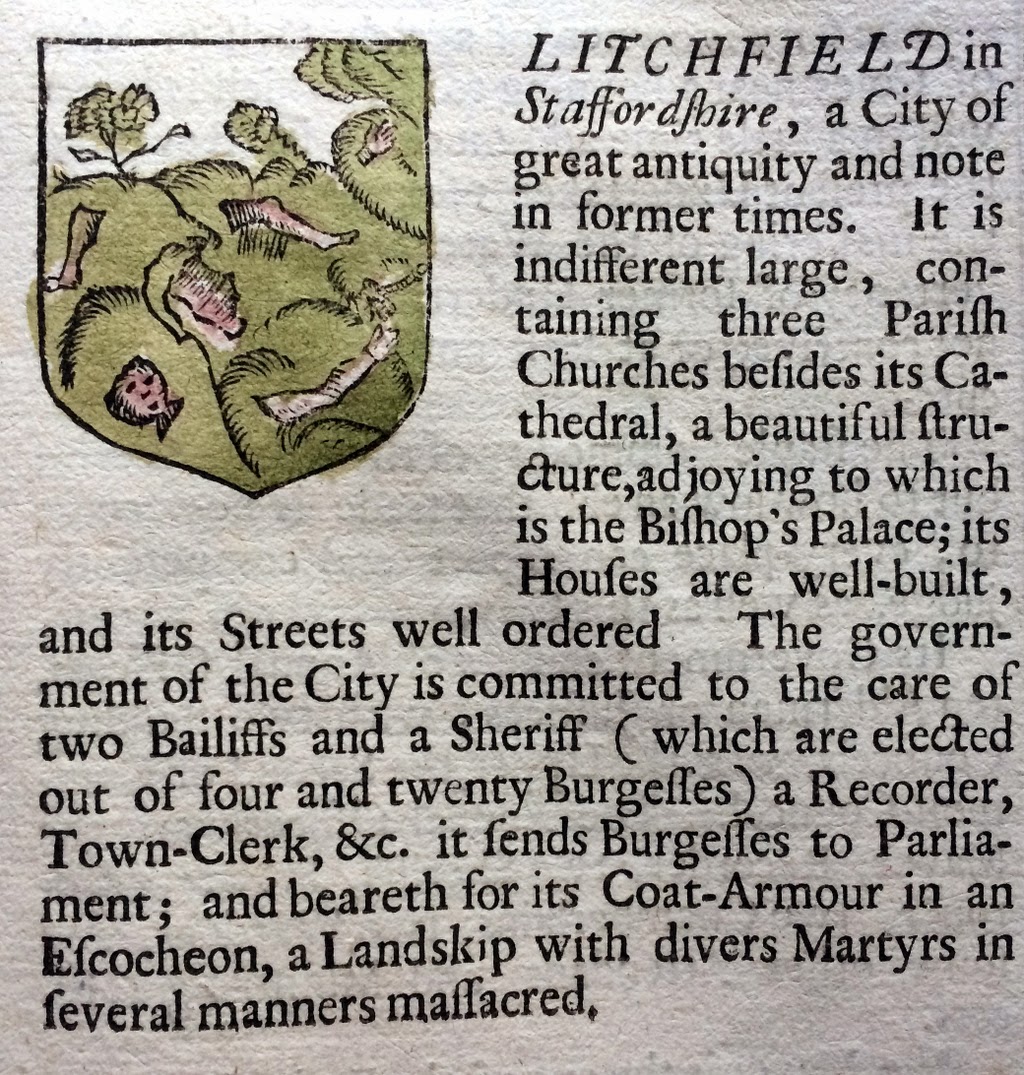 Our copy of the Display was once owned by a Mr John Twemlow of Hatherton, Cheshire. The Twemlow family seem to have been minor gentry, although we know little of John Twemlow, other than his profession, surgeon, and one rather odd fact - he was the doctor called to examine the body of a young servant girl, found strangled in a field, in the notorious murder case of Mary Malpas in 1835. 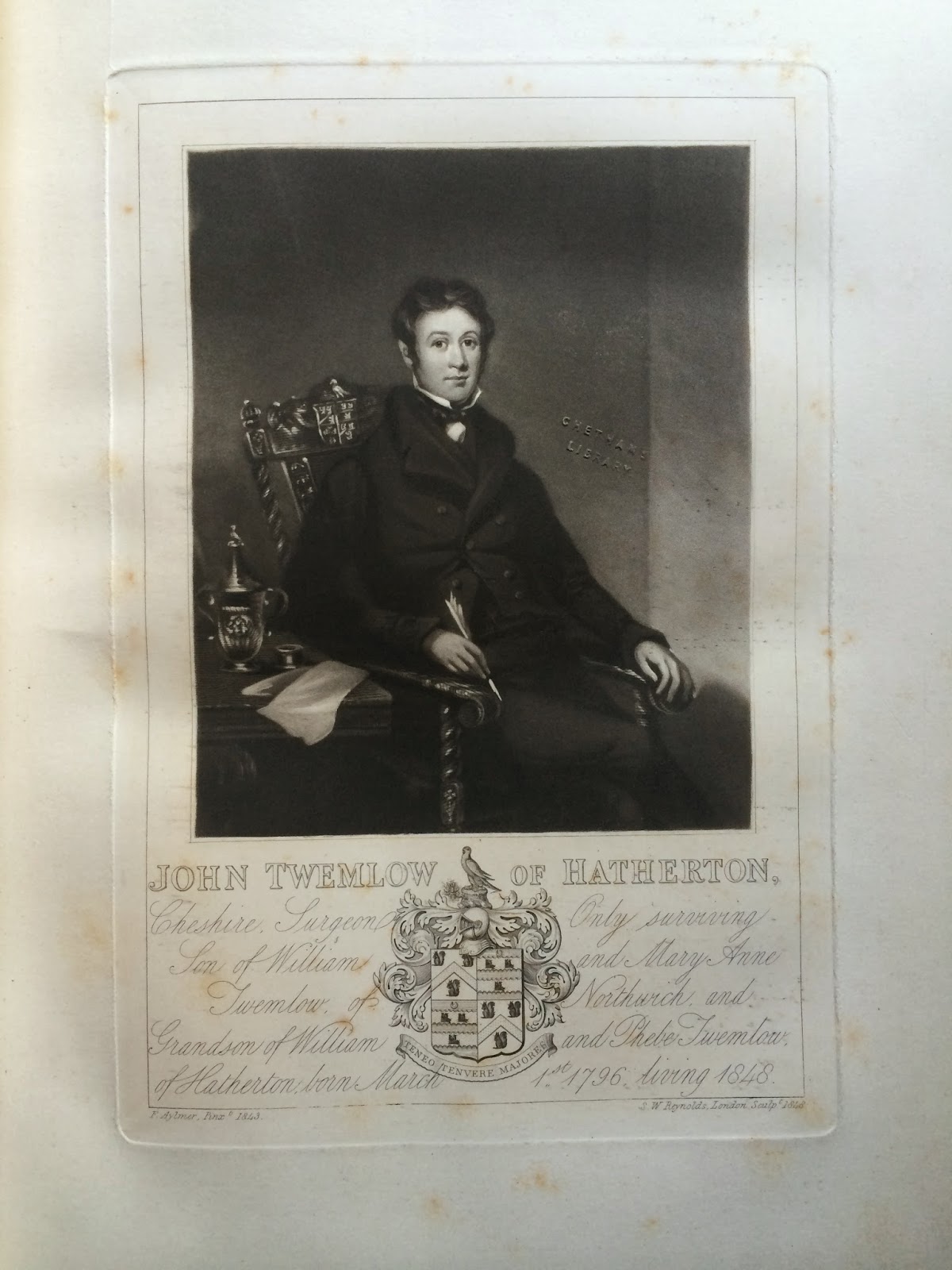 In the Census of 1851 he is described as aged 55 years and unmarried. He certainly seems to have had time on his hands, as he not only hand-painted every coat of arms in the Display (not always very neatly!) but also subjected the book to the process known as Grangerisation (after the Rev James Granger). This practice, which became popular in the eighteenth and nineteenth centuries, is also known as  ‘extra illustration’ and is essentially where the owner of a book dismantles and rebinds it to include prints, drawings, maps or even photographs. Mr Twemlow’s selection includes mainly family portraits (including Hector and Silvia his dogs) and images of the ancestral home and land. 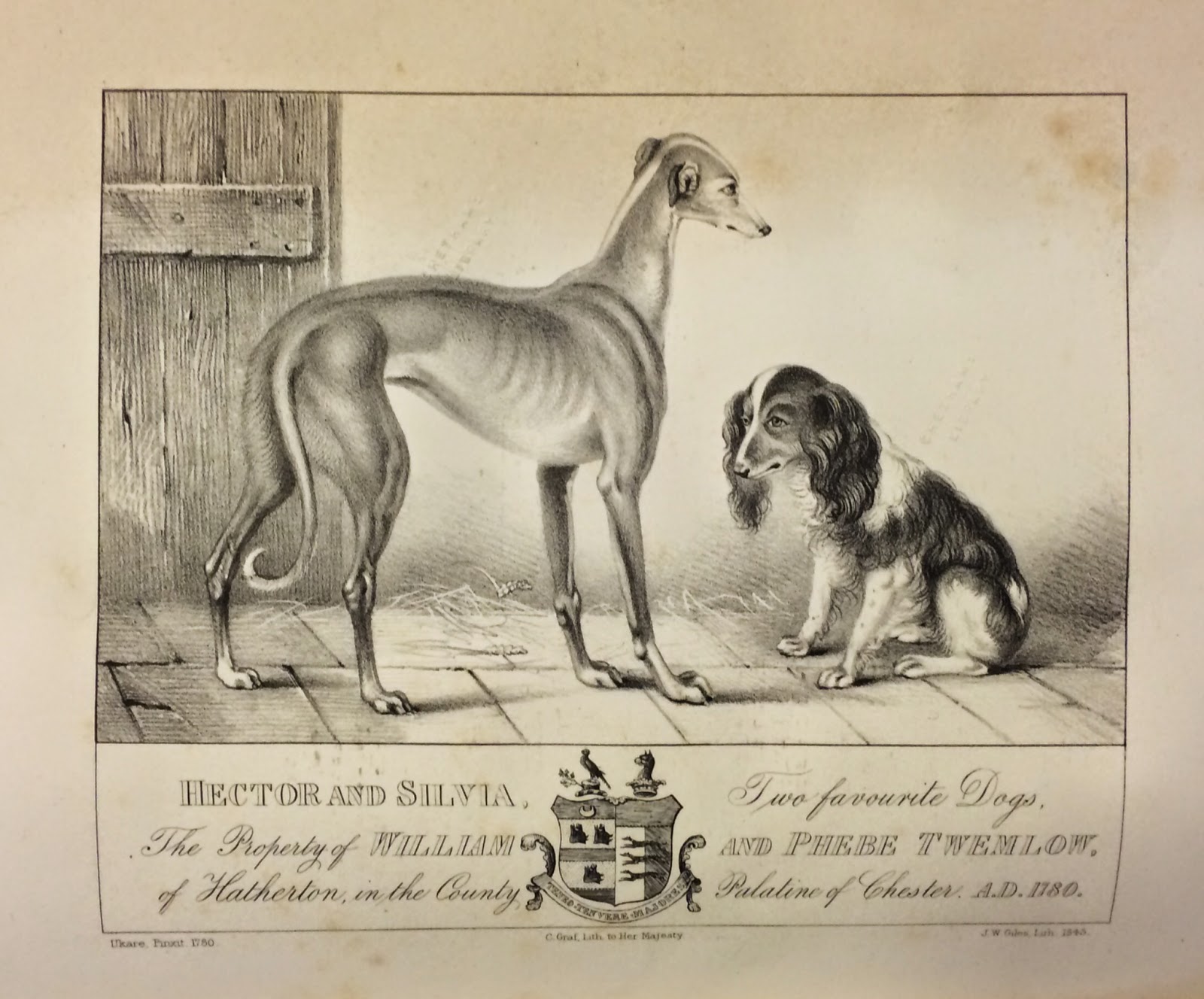 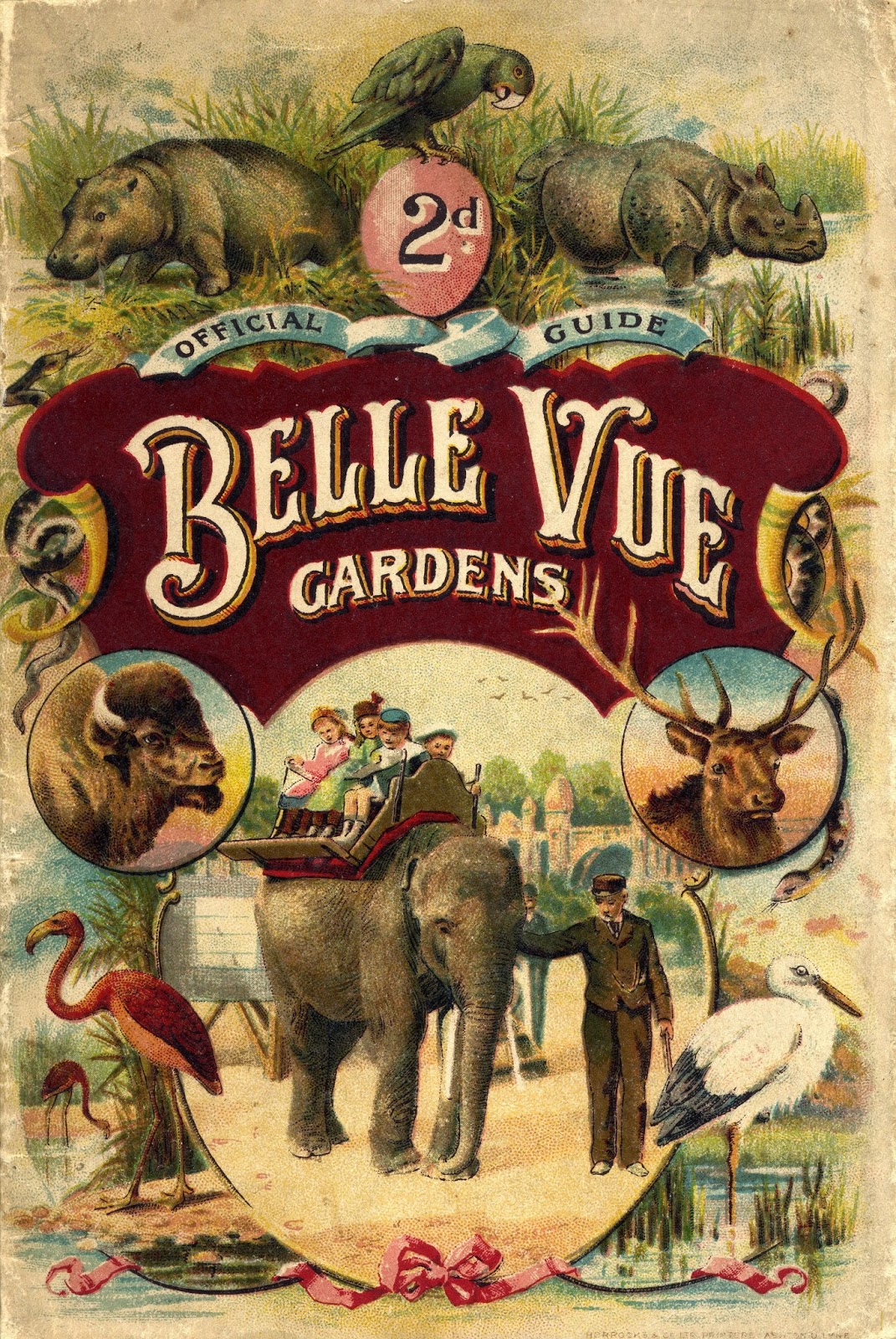 We are very pleased indeed to announce that our new Virtual Belle Vue website is now live!

Thanks to a generous grant by the Esmée Fairbairn Collections Fund and the hard work of Project Manager Kathy Whalen, Senior Librarian Fergus Wilde, and a stream of committed volunteers, the Library has been able to digitise thousands of photographs, newspaper cuttings, programmes and publicity material, all of which are now available to browse on the new site.

But this is only the beginning - there's more material to add, and we would love your help online putting names to faces, dates to events, and to hear your stories and memories. You can add your comments to the site, and we welcome additional donations of memorabilia and material relating to Belle Vue. This year we've already been presented with a bronze statue, a speedway scrapbook and a collar from a pet bear!

Take a look at the site and get involved here. 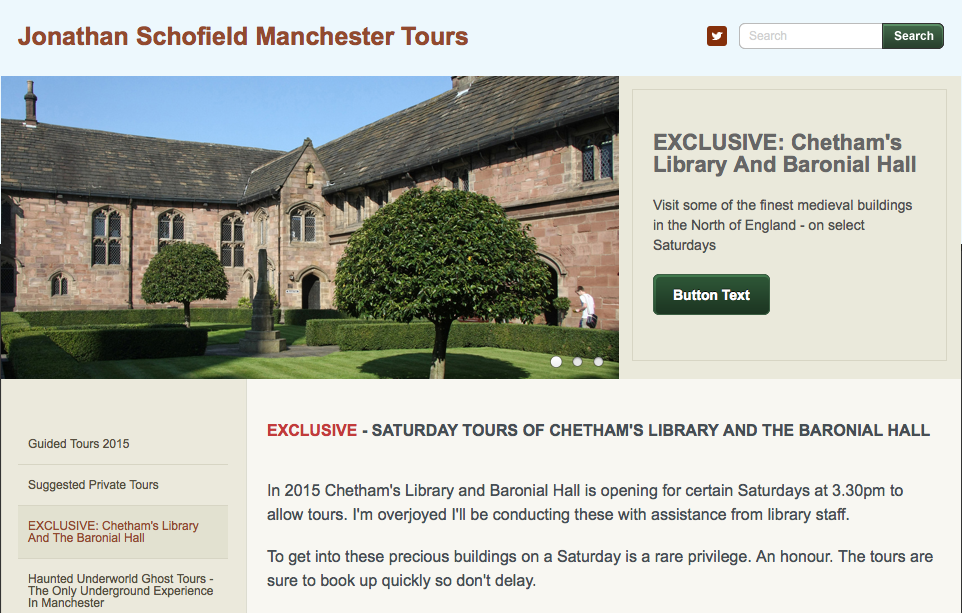 We're thrilled to announce that we'll be opening on certain Saturdays during the spring and summer for a brilliant new tour with Jonathan Schofield. Jonathan will guide you round the medieval buildings and the Library and build up a picture of the incredible history of our extraordinary site.

These tours are sure to book up extremely quickly, so pop over to Jonathan's website now - we look forward to seeing you!
Posted by Chetham's Library at 12:30