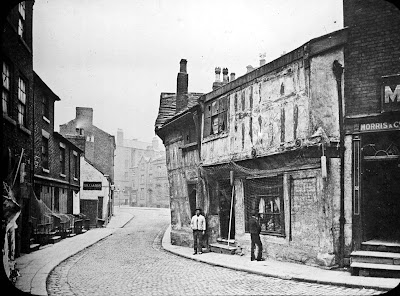 This photograph shows the Sun Inn on Long Millgate, now sadly demolished but once known as Poets' Corner owing to the regular meetings of writers and poets which were held there in the nineteenth century.

Out of these meetings was formed the Lancashire Authors Association, whose members included Isabella Varley (Mrs Banks, author of The Manchester Man), John Critchley Prince and Samuel Bamford. The group contributed to several publications including the Athenaeum Souvenir, published in 1843, and now made available as a pdf on our website.

You can view the pdf here, along with several other digitised works of local interest, all available free on the website.
Posted by Chetham's Library at 13:47