It's all go at the Library today as the Manchester International Festival prepares to swing into action on Friday. Considerable interest has been generated by Damon Albarn's opera Doctor Dee, and the Librarian is in constant demand from television and radio crews to talk about everyone's favourite Renaissance polymath. All the excitement has meant that the Library has been obliged to close its doors to the public this afternoon to accommodate the lengths of cable, lighting rigs and photography equipment.

At the same time as this, the dress rehearsal for another MIF production has been taking place in the Baronial Hall. Violinist Alina Ibragimova is performing a programme of musically connected works in several different parts of the medieval building, in a production that features a newly commissioned stop-motion animated film by the Quay brothers. The show runs from 1-17 July and tickets can be obtained at the MIF website.

All we need now is a visit from Snoop Dogg...
Posted by Chetham's Library at 14:55 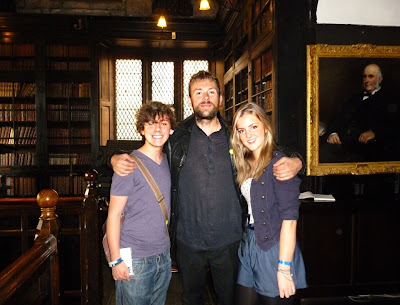 Another visit this week from the Library's new favourite musician, Damon Albarn, who is currently in Manchester preparing for the premiere of his opera Doctor Dee. By remarkable coincidence, the Librarian's daughter Kate and her friend George 'happened' to be visiting the Library at the same time, and are pictured here with the great man.

The purpose of his visit was to meet the Guardian journalist John Harris, whose article about Damon and his fascination with John Dee can be found here. Doctor Dee opens at the Palace theatre, Manchester, on Friday 1st July, and tickets are available here.
Posted by Chetham's Library at 09:56 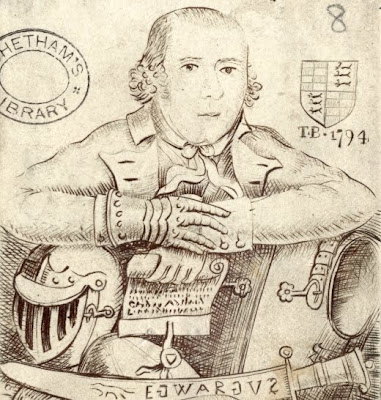 This week in our 101 Treasures of Chetham's series, it's the turn of Thomas Barritt and his remarkable C18th sketchbook. In it, he recorded people and places from Manchester and the wider region before the wholesale industrialisation that took place in the city in the nineteenth century. Have a look at his extraordinary sketches here.
Posted by Chetham's Library at 10:28 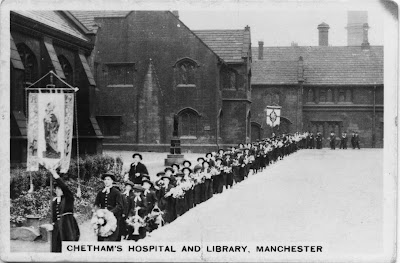 A cigarette card from the 'Sights of Britain' series, showing the boys from Chetham's Hospital taking part in the Founder's Day procession in their traditional Blue Coat uniforms. 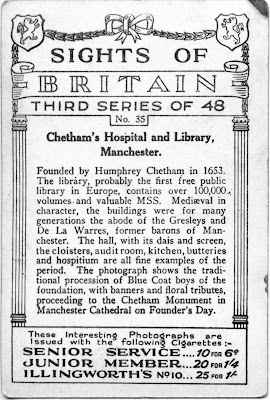 The card is from the collection of Mr Lawrence Boardman, whose father took many of the original photographs for the series in the mid-twentieth century. Together with his grandson, George Boardman Lee, Mr Boardman is currently involved in a project to retrace his father's footsteps and re-photograph the many different locations from a contemporary viewpoint. We wish them all the best with this not insignificant undertaking and look forward to seeing the fruits of their labours.
Posted by Chetham's Library at 09:00 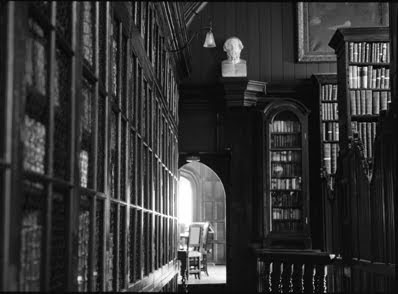 The beautiful seventeenth-century Library interior with its gated oak presses attracts a great deal of attention from photographers and film-makers, who frequently have a natural affinity for its atmospheric environment.

It is always fascinating to view their creative responses to the medieval building, and we were most interested to see this latest set of images taken by professional photographer Patrizia Wiener, who as well as having a most impressive photography CV, also studied philosophy at the University of Vienna.

The photographs can be viewed on Patrizia's website.
Posted by Chetham's Library at 09:00 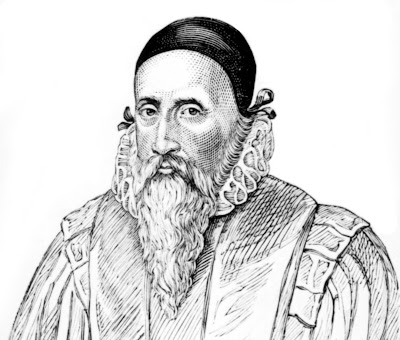 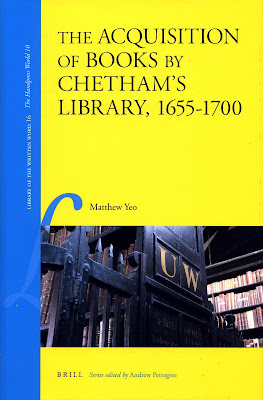 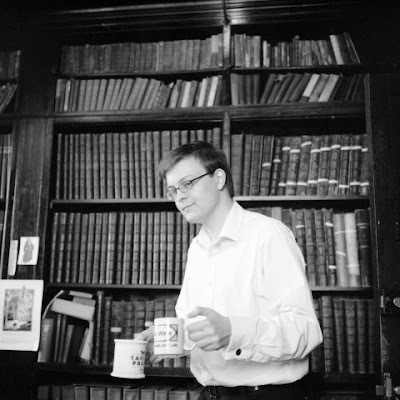