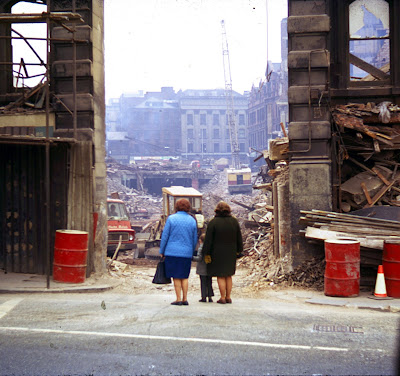 The Library has recently acquired a set of around two hundred 35mm slides taken by Prestwich resident Margaret Openshaw Newbold (1905-1998). These form part of a collection donated by Ian Pringle of Prestwich, and are largely concerned with the wholesale demolition of Victorian buildings in Manchester city centre that occurred in the 1960s and 70s, and the subsequent redevelopment.

The image below shows two of Margaret's photographs of the Ramada Hotel site taken during the demolition of the Deansgate Hotel building and after the 'improvements': 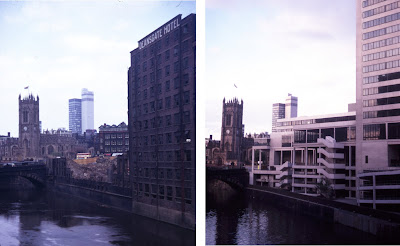 Here are the foundations being put in once all the demolition is complete: 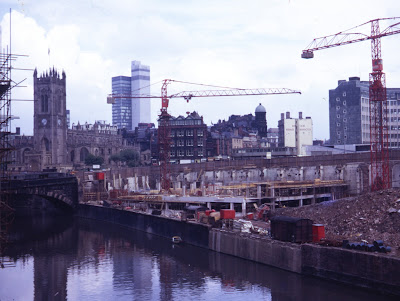 Round the corner on Victoria Street, these passers-by are stopping to take in the scale of the destruction: 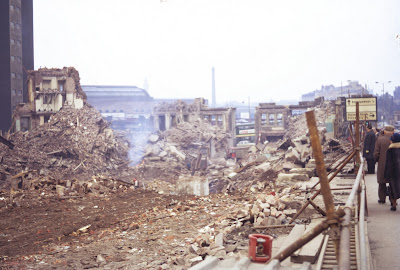 And here is the site of the glorious Arndale Centre: 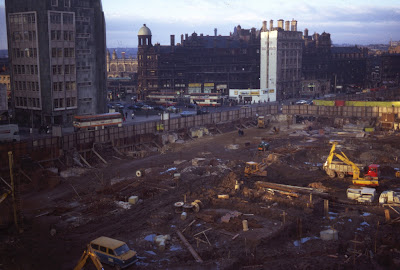 Margaret's shot of the billboard advertisement heralding the changes: 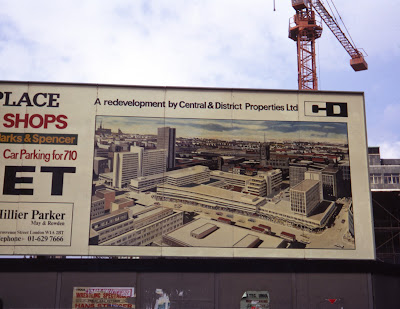 It is staggering to see the extent of the demolition of high-quality Victorian and Edwardian brick and stone buildings for which society has now developed much more of an appreciation. Demolition on a scale like this would now be perceived as indiscriminate vandalism. It is also interesting to note that many of the new concrete buildings erected as replacements have themselves been demolished and replaced as part of the rebuilding programme of the last ten years, provoking the inevitable question of whether buildings of such beauty and quality will ever be constructed in our cities again.
Posted by Chetham's Library at 09:00 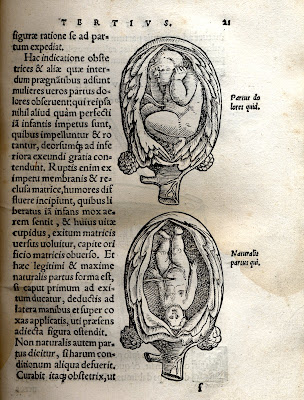 Jacob Rueff (1500-1558) worked mainly as a surgeon in Zurich but also had responsibility for training midwives. His book De conceptu et generatione hominis (1554), written essentially as a manual for midwives, is important for its emphasis and also its illustrations of anatomy in relation to obstetrics. Divided into six sections, the book covers the entire cycle of pregnancy, starting with conception and ending with causes and remedies for sterility. The work is full of remarkable woodcuts, including anatomical drawings, obstetrical instruments and the various positions of the fetus within the uterus as well as pictures of deformed infants. 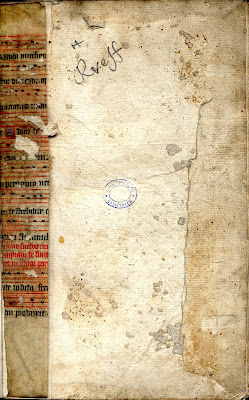 The Library’s copy of De conceptu has several unusual features, including what appears to be the original C16th calf binding, complete with C15th manuscript pastedown. In addition, the book has the signature and also annotations in the hand of Thomas Newton (1544/5-1607), an English physician, clergyman, poet, author and translator. Newton was born in Cheshire and educated at Macclesfield Grammar School, and between 1569 and 1596 he published perhaps twenty books on a wide range of subjects, including an edition of Seneca’s Tragedies and a work on physick and physicians. 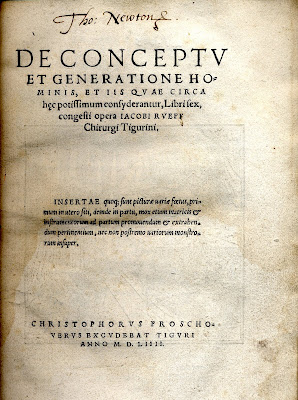 Perhaps most remarkable, however, is the savage mutilation that the book has undergone. Many of the illustrations, particularly of deformed infants, have been cut out altogether, often very crudely. By way of explanation, a letter has been attached at the front of the book. Dating from 1878, it is in the hand of J. Frederick Becon of Beaumaris, offering the work to the Cheshire historian J. P. Earwaker. He writes:

"I have much pleasure in asking you to accept the book containing the Newton autograph. I cut out some of the most disgusting of the monstrosities, without (I think) much impairing the letter-press. Should you not like to retain the book, it might perhaps be an acceptable addition to the medical books at the Chetham Library." 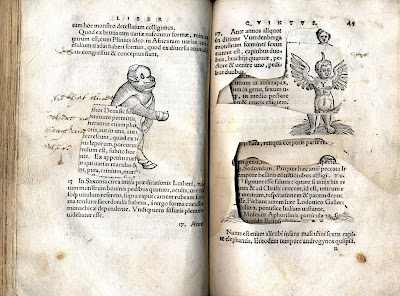 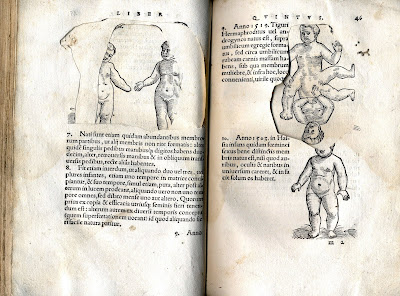 Evidently Earwaker declined to accept the book, making his loss the the Library's gain, despite Becon's savagery. As an example of censorship, it is remarkable for the extent and sheer barbarism of his cutting. A very beautiful and important work, which remained a key text for midwives for over a hundred years, has been reduced to little more than a series of scraps.
Posted by Chetham's Library at 10:37

Librarian Michael Powell was interviewed by journalist and blue badge guide Jonathan Schofield of the Creative Tourist website. The resulting audioBoo can be heard here.
Posted by Chetham's Library at 10:02 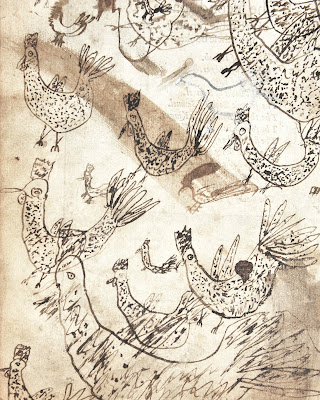 Writing notes and family trees in Bibles is a very common activity, but it is rare to come across examples of sketches and drawings, especially when they appear to have nothing to do with the accompanying text. 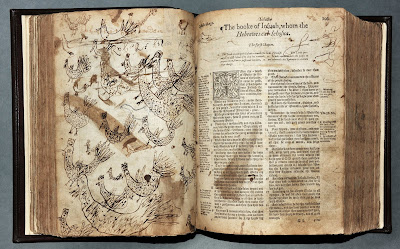 This page of lively pen-and-ink hen sketches appears in an English Bible of 1577 opposite the first page of the book of Joshua. The Bible appears to have been owned by members of the Taylor and Fitton families, various members of which mark their ownership at intervals throughout the book. In a separate inscription on the New Testament title page, one Samuel Taylor writes: "God give him gra[ce] on ito looke that he may run A happay race and heaven may be his dwelling place". 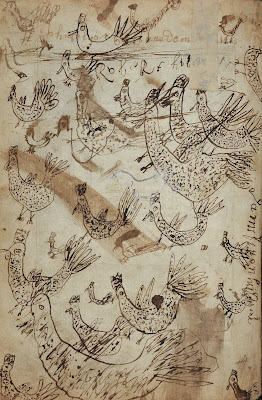 The little hens seem most likely to have been the work of Robert Taylor, probably a young son of John Taylor who owned the book in the 1660s. Sharp-eyed readers may also be able to spot the image of a tiny leaping horse which appears in the top left hand corner of the opposite page (by clicking on each image you may view a larger version). 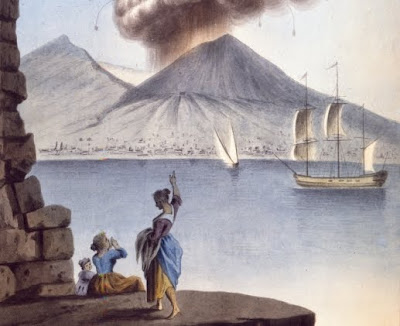 Head over to the 101 Treasures of Chetham's series on our website for a closer look at this beautiful illustrated work showing Sir William Hamilton's meticulous observations of the behaviour of volcanoes, published in Naples in 1776.
Posted by Chetham's Library at 10:30 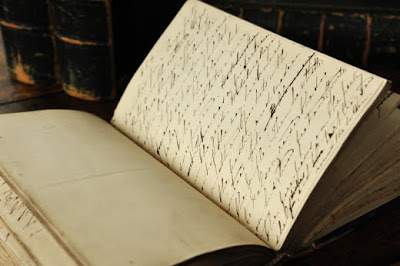 This week in our new series 101 Treasures of Chetham's, we take a closer look at the original handwritten manuscript of The Manchester Man by Mrs G. Linnaeus Banks. Head over to the website to find out more.
Posted by Chetham's Library at 10:03