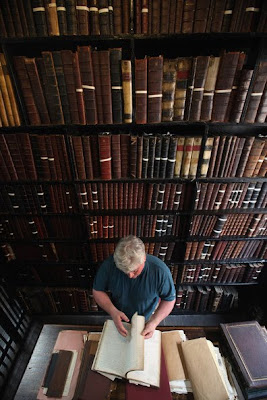 This unusual view of the Library is one of a new collection taken by award-winning photographer Christopher Furlong, senior photographer with Getty Images. Christopher's imaginative shots offer a refreshing new perspective on the medieval building and its seventeenth-century interior, and can be seen in full here. Some of the images were used in a recent article in the Mail Online, which can be viewed here.
Posted by Chetham's Library at 11:17

Baroness Bakewell on whether libraries matter

As libraries everywhere come under yet more threat from visigoths, polymath, author and now Baroness Joan Bakewell has proved that she is still the reading man's crumpet. As the Guardian reports, Baroness Bakewell's spirited defence of public libraries emphasised the vital role free libraries play in forming lives. She alluded to Chetham's Library in her speech:

"My grandfather, an iron turner in a Salford factory, died at the age of 33 and my father was sent to Chetham's Hospital, then an orphanage for poor boys in Manchester and now a world-famous music school. Chetham's had, and still has, one of the finest 17th-century libraries in the country. My father grew up loving books. The importance of libraries in the life of a child should not be underestimated."

We salute her.
Posted by Chetham's Library at 11:51