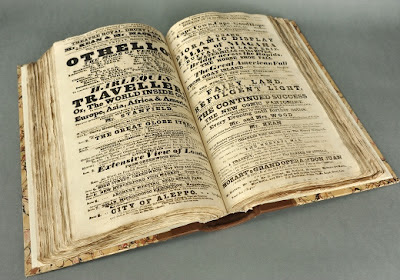 This week's feature in our 101 Treasures series is a tightly packed scrapbook containing an unusual and complete record of performances over a full season at London's Theatre Royal on Drury Lane. Read more on the website.
Posted by Chetham's Library at 11:25 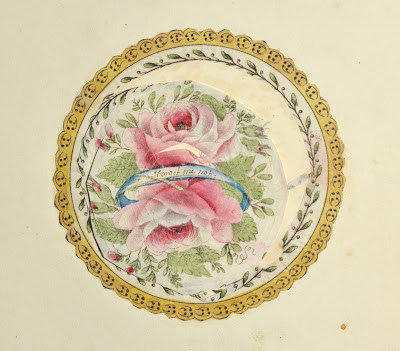 We have recently acquired a small nineteenth-century commonplace book belonging, we think, to someone by the name of Winnie, who has collected verses, newspaper clippings, excerpts from literature and engravings, as well as her own sketches and watercolours.

We particularly liked this hand-coloured scrap which has been intricately cut to create a three-dimensional cloche shape. When the tiny string is pulled and the paper shape is lifted, it reveals two tiny hand-painted hearts entwined together. 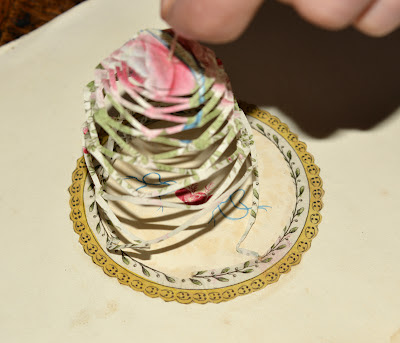 In spite of her apparent delight in romantic trivia, Winnie had obviously seen enough of life to have developed a keen sense of irony, and on another page she neatly copies out this piece of eighteenth-century wit entitled 'Recipe for a love-letter':

Take five hundred protestations, half as many vows, three thousand lies, fifty pounds weight of deceit, an equal quantity of nonsense, and treble the whole of flattery. Mix all these ingredients up together and add thereto half a scruple of sincerity, sweetening it often with the words Angel - Goddess - Charmer - Honey and the like. When it is sweetened to your taste, take as much of it as a time as you think proper, fold it up in gilt paper, seal it with the impression of a flaming heart full of wounds - let it be carefully delivered, and it is irresistible.
Posted by Chetham's Library at 15:37

Or, I think therefore Edam... 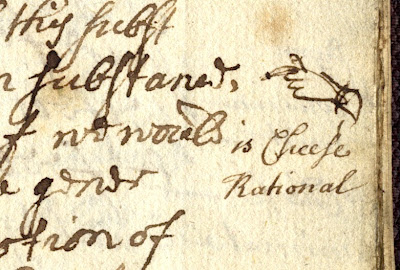 The slim manuscript volume at Mun.A.3.74 looks unprepossessing in its dull 19th-century cloth binding.  Inside a late 17th-century hand promises more interest, although the title 'A similitude to contemplate ye generation of eternal nature' seems a bit daunting to the modern reader. Yet in the margins of this tract we have discovered our favourite bit of marginalia to date.

The first part of this essay describes in some detail how to make cheese using 'runet' and milk. The rennet is added to the cheese, the maid mixes the milk and cheese by hand, the resultant mixture is let set until it congeals, pressed, and then aged... This creative process, our anonymous author hopes, will prove a helpful metaphor for understanding the 'generation of eternal nature', or the inevitable process by which the divinity re-creates itself as the never-ending Trinity, and in particular the Son who is God made man and yet remains God. This may be an attempt to explain the theological principal expounded by theologians such as Jakob Boehme, who writes, 'This Abyssal Nothing will introduce itself into Something, viz., into Nature, that is, into Properties: and through Nature into Glory & Majesty'.

John Byrom, who owned this little manuscript before it came to the Library, was an enthusiast of all things mystical. An earlier reader seems less than convinced by the arguments our scribe expresses. As the argument builds to the climax of cheesy transformation, a manicule, or pointed finger in the margin, engages with the text, asking, 'Is cheese rational?'.  On the next page another manicule continues the silent argument: 'Is cheese animal & do we eat it alive?' 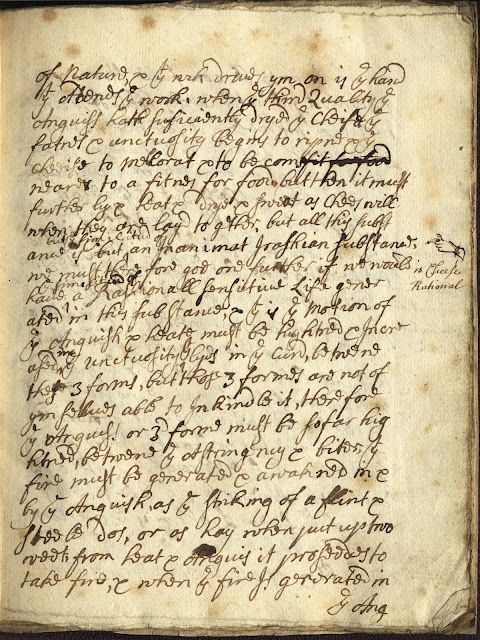 Sometimes marginal annotations, even those decorated by engaging pointed hands, simply draw attention to interesting bits of the text, or act as a running index, highlighting important words. It is a bonus when one is as amusing as this. 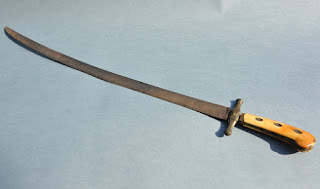 There's a treat in store on the website today for those with proper appreciation for an impressive weapon: General Wolfe's Sword is this week's featured item in the 101 Treasures series. Read more about it here.
Posted by Chetham's Library at 10:47

Perhaps she's on the Railway

For those of us who watch American politics from afar - even with all of the acuity that is the hallmark of Chetham's Library staff - it's sad to say the only thing any of us know about the Republican challenger Mitt Romney is that he is filthy rich and that he is a Mormon.

Whilst being rich has seldom been seen as a crime in itself - at least until relatively recently - being a member of the Mormon faith has often earned the subject considerable opprobrium and hostility. Why should this should be the case?

Not because the Mormons inflicted the Osmond family, with all their clean living and perfect white teeth, on an unsuspecting public used to a diet of pies, sugar and flat beer, resulting in many people in the North West having their 'mouths cleared' by the age of twenty-one (ie removing all teeth and replacing them with dentures). No, as a ballad from the Library's Holt collection demonstrates, hostility to Mormons is not down to their clean living, but quite the opposite: that they all have more sex than the rest of us. Having said that, one would have to be pretty badly starved of sexual congress to wish the following on one's ex-wife (click to enlarge and see text below): 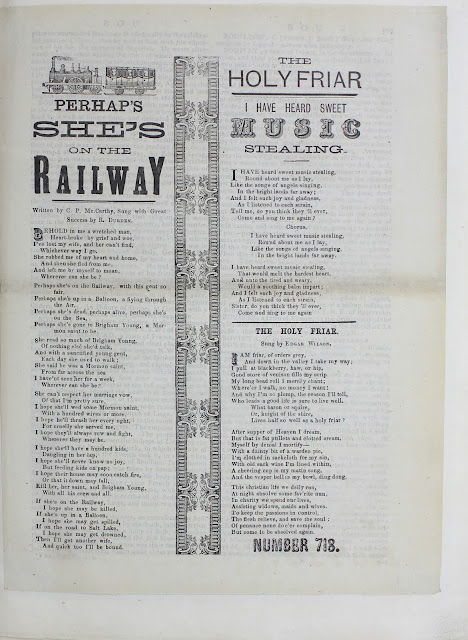 Behold in me a wretched man,
Heart-broke by grief and woe,
I've lost my wife, and her can't find,
Whichever way I go.
She robbed me of my heart and home,
And then she fled from me,
And left me by myself to moan,
Wherever can she be?

She read so much of Brigham Young,
Of nothing else she'd talk,
And with a sanctified young gent,
Each day she used to walk;
She said he was a Mormon saint,
From far across the sea
I haven't seen her for a week,
Wherever can she be?

She can't respect her marriage vow,
Of that I'm pretty sure,
I hope she'll wed some Mormon saint,
With a hundred wives or more.
I hope he'll thrash her every night,
For cruelly she served me,
I hope they'll always row and fight,
Wherever they may be.

I hope she'll have a hundred kids,
Dangling in her lap,
I hope she'll never know no joy,
But feeding kids on pap;
I hope their house may soon catch fire,
Or that it down may fall,
Kill her, her saint, and Brigham Young,
With all his crew and all.

Shouldn't you be wearing white gloves? 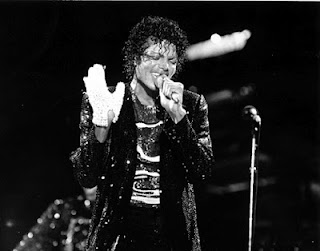 Visitors to Chetham's will be only too aware of the sartorial elegance on daily display at the Library. Indeed, of all the terms used to describe Library staff, 'dapper' is the one that most often trips off the tongue.

Few will be aware of the real reason behind our high standards, so let us reveal that here at Chetham's we are slavish devotees of style manuals. For accessories, the finishing touch to any ensemble, we have only one bible: Edith Heal's 1962 text Gloves: Fashion and Etiquette. No other document has such sound advice, containing a lists of do's and don'ts that are self evident truths:

As with any style manual, regular updating is necessary, and we would like to offer our own very definite 'DON'T':

Where does this library glove-fetish come from? This is a practice without any great pedigree. Institutional insistence that readers and staff don white cotton gloves when handling rare books and documents to prevent dirt and skin oils from damaging paper-based collections is a relatively new phenomenon dating from the last decade of the twentieth century. Possibly it owes something to a collective phobia about hygiene, the idea that without anti-bacterial wipes we are in danger of destroying half the world's population.

Certainly it has been propagated by the huge numbers of television programmes devoted to antiques or to genealogy in which every single object has to be handled with white cotton gloves. In truth, white cotton gloves provide no guarantee of protecting books and paper from perspiration and dirt. Cotton gloves are not only useless, they are positively harmful. They increase the likelihood of inflicting physical damage to material, reduce manual dexterity and the sense of touch and increase the tendency to 'grab' at items. Cotton fibres may also lift or dislodge pigments and inks from the surfaces of pages and can even result in pages being snagged.

Clean hands, washed and thoroughly dried are perfectly adequate to safeguard rare books and archival collections. If you are still in any doubt, we direct you to the British Library guidelines 'The use of white cotton gloves for handling collection items'. For full research see the article ‘Misperceptions about white gloves’ by Dr. Cathleen A. Baker and Randy Silverman in the December 2005 issue of International Preservation News.

Finally, to hammer the message home, it is time to resurrect the old joke: What do archivists and Michael Jackson have in common? They both wear white gloves for no purpose.